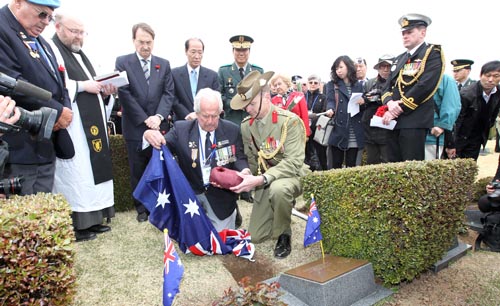 
BUSAN - An Australian woman’s wish to be buried alongside her husband, Captain Kenneth John Hummerston, was finally fulfilled when she was interred at the UN Memorial Cemetery in Busan on April 14. Hummerston’s husband served in the Korean War (1950-53).

Some 20 Korean War veterans from Australia, Britain, Canada and New Zealand attended the ceremony to pay their respects to the couple.

“Before Nancy died, she told us of her wish to be buried with her husband in Korea,” said Korean War veteran Col Berryman, 75, who brought Mrs. Hummerston’s ashes to the cemetery.

Mrs. Hummerston passed away on Oct. 12, 2008, at age 91. The UN Memorial Cemetery accepted her ashes and she was laid next to her husband as she had wished.

Captain Hummerston was killed almost 60 years ago, just six days after he was deployed to Korea on Oct. 2, 1950, when his jeep was blown up by a land mine that killed both him and his driver. He was 34 years old. His death came just a year after the two were married.

The couple met in Hiroshima, Japan, where Mrs. Hummerston, an Australian Army lieutenant, was stationed, and dated for three years before they were married.

Mrs. Hummerston returned to Australia after her husband’s death. There, she cared for returning war veterans. She went on to devote the rest of her life to working as a nurse at a social welfare center.

But she always knew that she wanted to be laid to rest next to her husband, said Berryman, who works for a veterans’ association in Australia.

“This is the first time that someone has requested, and been allowed, to be buried next to their spouse at the UN Memorial Cemetery in Busan,” said Park Eun-jeong, a public relations official with the Busan cemetery who attended the ceremony.

When asked why she had chosen to attend a ceremony for someone she didn’t know, she said, “I want to pay homage to [the couple].”

In the Korean War, Australia dispatched a total of 17,000 soldiers to Korea: three army battalions, three squadrons and 11 navy vessels including two aircraft carriers. Australia lost 339 soldiers in the war, 281 of whom are buried in the UN cemetery in Busan.