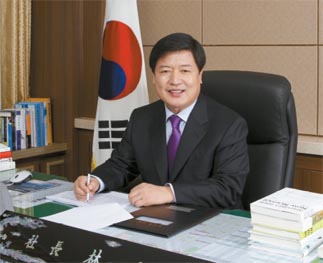 To get through the financial crisis, Korea Electrical Safety Corporation President Lim In-bae used a strategy he calls “one-second management.” He discussed his firm in an interview.

What has promoting “one-second management” achieved?

First of all, a 60 billion won deficit became a profit in just one year, and the company became No. 1 in a government management evaluation, one of the most reliable checks on management for the previous year. That means KESCO has been acknowledged as the most advanced public company.

What is the secret to turning tens of billion won deficit into a profit?

The employees understood and actualized one-second management. In 2009, KESCO signed MOUs with 700 public and private firms and operated a 24-hour emergency service call center. We also participated in safety inspections in Korea and overseas.

What caused the company to enter the overseas market last year?

When I became the president, we were 60 billion won in debt and profit sources were limited to legally-mandated inspections and safety management. Since we are a public company, we can’t raise fees on our own. To overcome this situation we went overseas. With a team to make overseas inspections a core business, we received orders in nine countries and conducted exchanges and education in developing countries. Last year we raised over 3 billion won signing MOUs with builders working overseas.

Technology. Electrical checks on ships, which require unique equipment, were conducted by foreign companies but now, KESCO is in charge, showing how much it has gained.

What is KESCO’s goal for this year?

We will work to improve the welfare of our employees, and work hard to maximize profit by reinforcing our global competitiveness.