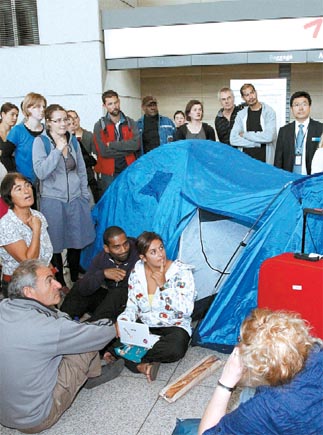 Stranded passengers bound for Europe set up a tent in the terminal of Incheon International Airport after outbound flights were canceled yesterday. Passengers w

The volcanic ash cloud from Iceland, causing cancellation of flights to and from Europe, is hurting airlines, hotels and electronics exporters.

According to industry sources, a total of 57 passenger and cargo flights have been canceled by the nation’s two major carriers since Thursday, when the volcano erupted. The predicted per-day loss is expected to be around 3 billion won ($2.7 million).

The local tourism industry is also busy dealing with travelers who wish to go home or get to Seoul.

“There are around 600 travelers who weren’t able to fly and around 200 travelers stuck in Europe,” said Cho Il-sang from Hana Tour, the nation’s leading travel agency. “But considering that April is an off-peak season, the loss isn’t that bad.”

“The devices that are already in Europe are worth a week’s sales or production,” said an official from Samsung Electronics. “We hope the disruption doesn’t last long.”

The Korea Meteorological Administration said yesterday that the ash cloud from the eruption could reach Korea this Friday, though they expect little impact.

“Since there isn’t much sulfur in the ash cloud, it won’t cause acid rain,” said Chung Young-sin, a senior researcher at the National Institute of Meteorological Research.