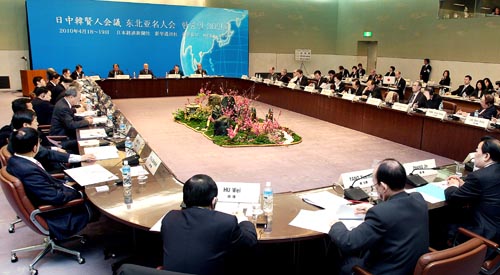 Thirty prominent figures from China, Japan and Korea yesterday meet to discuss defining the role for the three countries in the changing world at the fifth Northeast Asia Trilateral Forum, in the New Prefectural Public Hall in Nara, Japan. By Kang Jung-hyun

Umehara stressed the three Asian powers should transcend the past so that they could form a future-oriented Asian community.

Umehara said that goal will be reached only when the three countries turn their attention to Asia while keeping close ties with Western countries.

The leaders of the three countries agreed on the need for a successful G-20 Summit, which is scheduled to be held in November in Seoul, to reflect the global shift in power from the West to Asia.

“After the international financial crisis hit, there was agreement that the G-20 Summit has become the best international channel for world leaders to discuss and map out new directions on issues related to international economies other than the G-7 summit,” Lee Hong-koo, former prime minister of Korea, said in a keynote address yesterday.

Former Chinese Vice Premier Zeng Peiyan said the three countries should guard against protectionism emerging in the aftermath of the financial crisis.

“A new international monetary system that doesn’t depend on U.S. dollars should be launched,” Zeng said.

Yasuhiro Nakasone, a former Japanese prime minister, said forming trust among leaders of the three governments is crucial and he suggested holding a conference in which the nations’ leaders can discuss matters through video conference calls.

The annual Northeast Asia Trilateral Forum was started in 2005 by 30 prominent figures from China, Japan and Korea who believed the three countries should work together to boost cooperation in an effort to thrive in a fast-changing world.

“The first Korea-China-Japan trilateral summit was launched in December 2008 and was held annually after the Northeast Asia Trilateral Forum discussed the need to create a summit where the leaders of the three countries could discuss mutual cooperation and development,” said Tetsuro Fukuyama, the state secretary for foreign affairs of Japan.