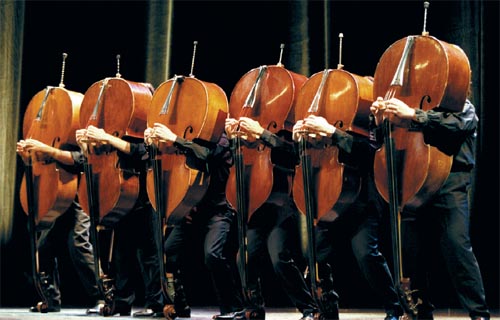 The lights go out and it suddenly feels like you’re in the middle of a forest. A bird chirps and you hear a monkey’s call.

All of these sounds, you may be surprised to learn, were made by the contrabass - six of them to be exact. All six instruments, along with their players, appear in a new show by L’Orchestre de Contrabasses, a French company that is returning to Seoul this month for its first performance here in four years.

The contrabass has long played a supporting role in the orchestra because of its large size and low range. There is even a play about the under-appreciated instrument. In “The Double Bass,” by Patrick Suskind, a humble contrabassist describes his frustrations with his instrument, telling the audience how little attention he and his double bass get compared to their colleagues.

L’Orchestre de Contrabasses change all of that with performances that put the contrabass and its player front and center on stage.

The ensemble was created in 1981 by Christian Gentet, a professor at Le Conservatoire National Superieur de Musique et de Danse de Paris, and consists of six contrabassists, all of whom serve as both composers and performers.

For the last 20 years, the ensemble has produced a number of hit songs, most notably one called “Bass, bass, bass, bass, bass & bass.” The song has frequently been played by many other contrabassists since its release in 1993. Other songs such as “Heureuse qui comme Elis” and “Father Moqueur,” which were written by members of the group, are also well known.

L’Orchestre de Contrabasses has performed to critical acclaim not only at its home in France, but also in Germany, Sweden, the United States, Brazil and Japan.

Le Monde wrote that “They have proved themselves to be musical pioneers in France,” while Allgemeine Zeitung said that “These six virtuosi admirably and tactfully multiply the possibilities of their strings, at the crossroads of jazz, the blues and classical music.”

The group has also won over audiences in Korea, where they have been nicknamed the “Dancing Contrabasses.” Their concert in February 2001 was sold out, leading to an encore performance here three months later.

The group has produced a number of CDs, which you can of course listen to, but the experience of seeing them in concert shouldn’t be missed.

The way the musicians commune with their instruments, eliciting strange sounds and human movements, will stay with you long after you leave the theater.