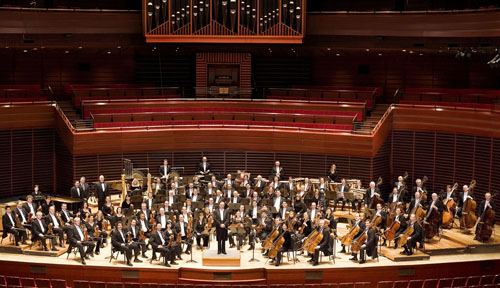 The world-acclaimed Philadelphia Orchestra will perform in Seoul next week at the Sejong Center for the Performing Arts. The concerts begin at 7:30 p.m. on April 30 and May 1. See MUSIC, below. [JoongAng Ilbo]

Saturday: Singer and rapper Bobby Kim is known for his smooth R&B voice and entertaining concert appearances. He’s been touring the country and lands in Seoul this weekend.

Kim debuted with the hip-hop group Buga Kingz. He has since released five solo albums, including last year’s “Love Chapter 1.”

He has released 15 albums, but is best known in Asia for his piece, “Prima O Poi,” which was used as a theme song for the popular Japanese animated film “Howl’s Moving Castle” (2004).

Joining Mirabassi are Leon Parker on drums and Gianluca Renzi on bass.

Tuesday: Known as “a lion of the keyboard,” Boris Berezovsky has established a remarkable reputation, both as a powerful virtuoso pianist and as a musician of unique insight and sensitivity.

Born in Moscow in 1969, Berezovsky studied at the Moscow Conservatory. Following his London debut in 1988, The Times described him as “an artist of exceptional promise, a player of dazzling virtuosity and formidable power.”

Two years later he fulfilled that promise when he won the Gold Medal at the 1990 International Tchaikovsky Competition in Moscow.

The concert program includes Liszt’s “Venezia e Napoli” and “Sonate” as well as pieces by Chopin.

Mayer will be joined by Markus Becker on the piano. Becker is a German pianist who won the first prize at the international Brahms Competition in 1987. This was followed by numerous awards in Germany and elsewhere.

April 30: Gary Moore, an Irish guitarist and a singer who has followed in the footsteps of the legendary Bob Dylan, has produced 26 regular albums, six live albums and 11 compilation albums, winning fans all across the globe.

April 30 to May 1: Under the direction of legendary conductor Eugene Ormandy, the Philadelphia Orchestra became world famous for its unique “Philadelphia Sound.” In the decades since Ormandy’s retirement, the orchestra has continued his legacy and is recognized today as one of the best in the world.

In its first concert in Seoul in two years, the orchestra will perform pieces by Stravinsky and Tchaikovsky.

May 2: From his first performance in Seoul in 2000 to his most recent performance in 2007, Chuck Mangione’s concerts have sold out with each appearance. Now, he is back for his fifth concert.

Mangione, 70, says music is the source of his youth. He has released more than 30 albums since 1960, but is best remembered for his 1977 jazz-pop single “Feels So Good.”

To Sunday: This play is directed by Seo Jae-hyung, the winner of 2009 Young Artist Awards hosted by the Korean Ministry of Culture, and was written by playwright Han Arum.

Set in the 1980s, this new creation tells the story of two brothers engaged in a cutthroat competition. Through its story, the play shows the exhausting and rewarding lifestyles of people in the 1980s.

To May 5: “God of Carnage,” a play originally by Yasmina Reza, is being produced by the Korean group Seensee Company and directed by Han Tae-sook.

The play is about two pairs of parents, one of whose child has hurt the other at a public park. The parents meet to discuss the matter in a civilized manner, but as the evening progresses, the parents become increasingly childish, and the evening devolves into chaos.

The performances start at 8 p.m. on weekdays, at 2 and 6 p.m. on Saturdays and public holidays, and at 2 p.m. on Sundays.

The dance is based on “The Sandman” by E.T.A. Hoffmann, a German author of horror. The story is similar to Mary Shelley’s “Frankenstein,” but is much lighter in nature.

The story depicts the life of a mysterious inventor, Doctor Coppelius, who has made a life-size dancing doll named Coppelia. The doll is so lifelike that a young villager falls in love with her, but he already has a real lover named Swanhilde.

To Dec. 25: This performance series featuring traditional Korean music and dance is held every Saturday throughout the year. It’s a great introduction to these art forms and an excellent resource for anyone with an ongoing interest in the traditional arts.

On every second week of each month, there will be a special presentation on the history of gugak (Korean traditional music).

Friday to Sunday: This changgeuk performance is an updated version of Lee Eun-gwan’s renowned opera “Seodo Sound and Babangi Exorcism.”

The original opera was designated as important intangible cultural asset No. 29. The opera’s cartoonish and humorous story line has made it a must-see for lovers of changgeuk, which is a traditional form of opera for a solo performer.

“Babangi Exorcism” will be performed by Park Jeong-wook, a noted singer of Korean traditional opera.

Tuesday: This performance series aims to provide a fresh perspective on traditional Korean music and culture. The concert includes a presentation on the story behind the performance. Audience members will also be invited to try herbal teas and learn yoga positions.

This week’s performance will be presented with the theme of “travel and dreams.”

May 1 to May 12: This performance is a re-enactment of a royal Korean banquet from the 15th century Joseon Dynasty.

April 30 to May 9: The Jeju Sulloc Festival is a landmark celebration promoting Jeju Island as the world’s best region for tea cultivation. The festival invites visitors to enjoy tea produced in the island’s clean natural environment.

Festival events include classes on sulloc tea preparation, a bus tour of Sulloc Tea Garden and a craft-making event where festivalgoers can make cards out of green tea leaves.

Take bus No. 100 in front of Gate 2 at Jeju International Airport to the Intercity Bus Terminal. Then take a bus toward Seogwangseo-ri.

May 1 to 5: The Daegu Herb Medicine Market has been in operation for 350 years. It is truly an international market, with medicines and merchants from places such as China, Manchuria, Russia and Europe.

The Daegu Yangyeongsi Herb Medicine Festival displays medicinal herbs that are found in the mountains of Korea. Visitors can experience a wide range of relaxing and curative traditional Oriental medicinal remedies and procedures. It is a fascinating event for foreigners who are interested in Korea’s medicinal herbs and the medical sciences and traditions of the East.

The “Heo Jun” competition, which is named after the famous physician, will also be held during the festival.

*Sports listings have been moved to Friday’s sports section. Event information is culled from the Korea Tourism Organization and other online sources.