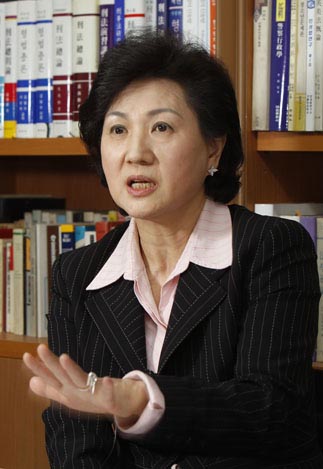 Kim Kil-tae, 33, who confessed to the brutal rape and murder of a teenage girl in February, is awaiting his trial that begins Friday. The courtroom proceedings are likely to fuel a debate about whether Korea should keep the death penalty or scrap it. The issue recently was highlighted when Justice Minister Lee Kwi-nam ordered the construction of an execution chamber at Cheongsong Prison, North Gyeongsang, last month while he was visiting the facility, which houses many of the nation’s brutal criminals.

According to Amnesty International, 59 countries retain the death penalty on the law books, while 25 countries carried out capital punishment as of 2008.

Lee Young-rahn, 61, a professor at Sookmyung University and an expert in criminal law, has joined the debate. She is known to favor the death penalty. Following are excerpts from an interview with Lee.

Q. People who urge the scrapping of the death penalty say the right to life is one of the basic human rights, and a government can’t deprive criminals of that right. Do you think we should respect criminals’ right to life?

A. The Constitutional Court of Korea upheld the death penalty in February, saying the human right to life could be restricted in some cases for the wider public good.

Does this mean that the human rights of brutal criminals are not protected [by the constitution]?

Korea hasn’t carried out an execution since 1998, but 10,000 people have been murdered in the last 11 years. And we have 57 people on death row. Is the suspension of executions one reason for the growing number of murders and other brutal crimes?

If we resume executions, do you think the murder rate will fall?

I don’t know. But one thing that is clear is that capital punishment is being phased out and that’s a worldwide trend. In some ways, I think that is ideal, but we should also take reality into account.

If the death penalty is scrapped, do you think it will encourage people to commit crimes, thinking they won’t be executed?

Yes. If there is no death penalty, people think they can at least save their lives. Psychologists and sociologists specializing in the criminal mind often say criminals tend to be very self-centered, meaning they cherish their lives.

Do you believe fear could prevent people from committing crimes?

That’s what I’m saying. The purpose of capital punishment is not at all about killing people, but to serve as a deterrent. We call it the power of fear.

But sometimes the worst criminals can be rehabilitated after spending up to 10 or 20 years behind bars.

Because of that, I can’t strongly advocate capital punishment. I think this is a task we all have to ponder upon and find solutions for. For now, the idea of capital punishment still exists. Although we have the death penalty, judges are very cautious in pronouncing death sentences. But people who are against capital punishment say we should scrap the idea completely. I think it is too early to erase the word.

It is hard to predict because judicial decisions reflect the social atmosphere at the time. All I can say for now is that the Constitutional Court of Korea made the right decision in February.

Sometimes we read foreign news that some criminals who were sentenced to death are released after 20 years or so because they were found to be innocent.

There is always the chance of misjudgment in the courts. But there are many ways to avoid such mistakes. For example, those convicted have up to three times to make an appeal. Scientific investigations have improved a lot. It’s ideal to introduce many other ways to prevent mistakes, but it’s not right to abandon capital punishment just because of the possibility of misjudgments.

Some say we have not carried out executions because we can’t ignore public opinion in some European Union countries, which oppose capital punishment.

That’s partially true. But if we continue with capital punishment, that doesn’t mean we are not an advanced country.

Some are concerned that capital punishment will harm the nation’s image as an advanced country, particularly when it is hosting many important events such as the G-20 summit in November.

It might affect the national image. It’s wise to keep up with global trends. Nevertheless, Koreans should make the final decision on how they should rule their own country. It’s like the case of dressing well to impress others. But if the clothes are uncomfortable, you don’t need to stick with them. The final decision should be made by the related officials. I see this issue from the point of view of a criminologist.

In the Bible, it says you should forgive your brother up to seven times if he sins against you.