Foot and mouth jumps to mainland

Foot and mouth jumps to mainland 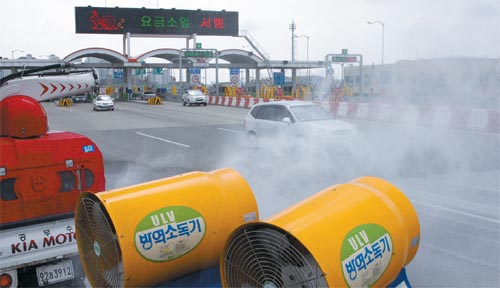 Quarantine officials sanitize vehicles passing through the tollgate at Ilsan Bridge, which connects Gimpo and Goyang, to deter the spread of foot-and-mouth disease, which broke out in Gimpo, Gyeonggi, yesterday. [YONHAP]


Korea’s Agriculture Ministry yesterday confirmed the sixth case of foot-and-mouth disease this month, as a cow from a farm in Gimpo, adjacent to Seoul, tested positive for the virus.

The latest outbreak fanned concerns that the disease was already on the mainland before recent efforts to stop its spread began, and not isolated on Gangwha Island, where the previous five outbreaks took place.

The Agriculture Ministry announced that a cow from a Gimpo city farm tested positive after its owner, who is raising 120 cows, turned the animal in for a test. The animal is infected with a strain based on blood type O, the same as in the previous five outbreaks.

The Gimpo farm is about five kilometers (three miles) away from a farm on Gangwha Island, where the first outbreak took place in early April.

But the latest outbreak left investigators puzzled as to how the virus has found its way to the mainland. The investigators said the Gimpo farm had seemingly no interaction or connections with the other affected farms, including sources of animal feeds, calf trading, house calls by vets or visits to area vet offices.

“We view that the virus had already made its way to the Gimpo farm before we started sanitary activities on April 8,” said one ministry official who asked for anonymity. 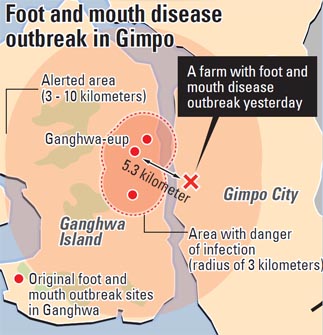 The ministry said all 194 cows, hogs and other livestock within 500 meters (1,640 feet) of the disputed farm will be slaughtered and it is considering whether or not to expand the range to three kilometers. It said nine nearby farms out of the 500 meter range will also be advised to have their livestock culled.

The outbreaks in April have already cost local farms 45 billion won ($40.3 million), as nearly 30,000 livestock have been or will soon be culled. The scale of the damage, for which the government will provide compensations, is larger than the previous six outbreaks in January near the Pocheon area in Gyeonggi, which cost 42.5 billion won on 55 farms.

The government also said another suspected case was reported in Boryeong, South Chungcheong, yesterday. The test result is expected this morning.