[Viewpoint] Are we too complacent on defense?

[Viewpoint] Are we too complacent on defense? 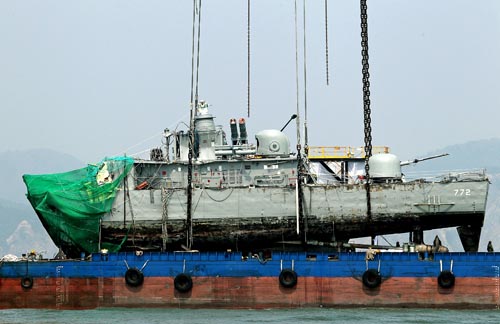 With help from civilian salvage team, the stern of the sunken naval corvette Cheonan was hoisted onto the deck of a barge on April 15. [JoongAng Ilbo]

Since the night of March 26, a series of tragedies have occurred.

They include the sinking of the naval corvette Cheonan, the death of a military diver who tried to find missing sailors trapped in the ship and the crash of a naval Lynx helicopter.

South Koreans worry whether there are serious problems with our military. President Lee Myung-bak said the cause of the Cheonan’s sinking must be disclosed in every detail and appropriately stern measures would be taken depending on the results of the investigation. His words console the people to some extent.

The Cheonan incident gives us many lessons. Although it is unclear whether North Korea was behind the incident, there are several grounds to be suspicious of its potential involvement.

North Korea warned several times of its possible military provocation. One wonders if South Koreans have become so accustomed to Pyongyang’s repeated warnings that we are becoming complacent about our national security.

If that’s the case, it should be corrected. Particularly, we must enhance our defense capacity both in the waters of the Yellow Sea that border the North and in the Seoul metropolitan area. North Korea has not only semi-submersibles but also hovercrafts and AN-2 transport aircraft.

With these military capabilities, North Korea is now equipped to send as many as 200,000 special force soldiers to infiltrate the South and carry out terror attacks on infrastructure.

Therefore, thorough and impeccable preparations must be made. If it is confirmed that North Korea was involved in the Cheonan incident, we should make sure that it will never again carry out such dangerous provocations.

In the past we did not respond with stern measures against North Korea’s provocations and that might have led to the Cheonan tragedy. So it is urgent to prepare a defense system against North Korea’s specific military strategy. With its cheap, asymmetric conventional weapons, North Korea can conduct damaging raids on our high-technology infrastructure.

Since our mandatory military service term has been shortened by several months, it is already becoming difficult to recruit enough noncommissioned officers and members of the Reserve Officers’ Training Corps. That is a serious problem that can weaken our defense system and therefore the issue of reducing the service term must be examined thoroughly.

Leaks of military confidential documents and the system of reporting must also be corrected.

Most of all, cooperation between Seoul and Washington should be improved. In case North Korea turns out to have been the culprit in the Cheonan disaster, the South Korean government plans to bring the case to the UN Security Council. For possible international sanctions on North Korea to be effective, cooperation with the United States is essential.

Ever since the two Koreas had naval clashes off Yeonpyeong in the Yellow Sea in 1999, North Korea has made constant efforts to acquire semi-submersibles and silent torpedoes, and there is reason to believe that Iran is involved in the effort.

Since Iran is emerging as a serious threat to the U.S. Fifth Fleet operating in the Indian Ocean, Washington cannot but be interested in the Cheonan case. Therefore, the Proliferation Security Initiative must be enhanced in order to monitor any transfer of nuclear arms, missiles and other weapons and equipment that could be used for military raids and, if need be, to stop their transfer.

Consolidating the existing alliance between Seoul and Washington and improving their policy cooperation are very important factors not only in monitoring North Korea’s suspicious moves, but also in acquiring information on its strategy.

In November, the G-20 Summit meeting is scheduled to be held in Seoul. Next year, the Track and Field World Championships is scheduled for Daegu. In 2012, Yeosu will be the host city of the World Expo.

These events might become potential targets for North Korea. North Korea’s covert provocations not only take lives and damage property. Such acts would also create a devastating aftermath by dividing our country sharply and forcing us to find someone to hold accountable.

Our military is working hard with the tasks of finding the missing sailors, salvaging the sunken ship and increased our vigilance against North Korea. We should encourage the military to do their job well and give them a chance to solve these problems. To make the precious sacrifice of the sailors on the Cheonan truly worthwhile, we must totally re-examine our defense system against North Korea.

*The writer is a professor at Hallym Institute of Advanced International Studies. Translation by the JoongAng Daily staff.