Wheelchair-bound, but still able to love

Wheelchair-bound, but still able to love 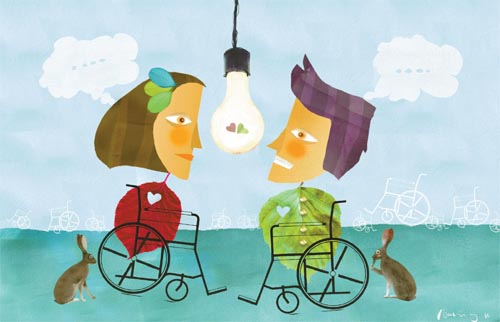 In many places in Seoul, there are three options when nature calls: man, woman or disabled.

For people in wheelchairs, it’s nice to find that third option, but many say that separate booths for men and women are few and far between, and aside from the embarrassment that can cause, it’s just another example that society sees the disabled as not man, not woman, merely other.

“We’ve been talking about the transportation rights of the physically challenged for so many years,” said Hong Sung-kee, a lawyer and actor who appears in a provocative film about disabled rights, “Sex Volunteer,” which opens today. “Those rights have improved a lot, as we have more ramps and elevators than before. [But] I believe it’s time for us to go beyond transportation rights and address other rights such as the sexual rights of these people. In Northern Europe, many projects are underway to satisfy the sexual desire of the disabled.”

In Germany, Switzerland and the Netherlands, where prostitution is legal, some services specifically target the disabled, such as the for-profit Dutch sex providers FleksZorg and SAR. In Korea, by comparison, even talking about sex between “normal people” can still be considered a taboo.

“Since it’s hard for us to move our bodies, if we express sexual desire, ordinary people are surprised or panicked,” said Cho Yoon-kyung, 37, who is the head of the online sex counseling Web site Pureun Ausung for the Disabled. Cho is the mother of an 11-year-old girl with her normally-abled husband. She has severe cerebral palsy, meaning she needs help even eating and going to the bathroom.

Inside the disabled community, Cho became famous when her marital life became the subject of a documentary in 2001, after which she was featured on a variety of TV programs. Since then, Cho has hosted a radio program and published a book based on her experiences as a sex counselor in 2008. She is currently preparing to campaign for Seoul City Council to represent the disabled community in the upcoming June general elections. 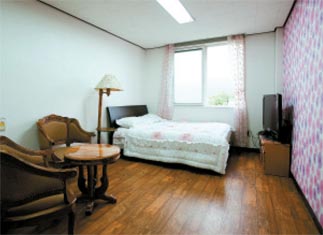 The National Rehabilitation Center provides its “Lounge for Love” to couples stuck in the hospital for long periods. Provided by the center

That Cho is able to discuss such topics in public and win support is evidence of how far Korea has come - while some of the more hostile responses she provokes show how far there is left to go. Korean law mandates that the disabled have a right to their sexuality, and even requires families not to interfere with the sex lives of disabled members.

Yet, despite that law and another one prohibiting discrimination against the disabled passed in April 2008, many physically and mentally challenged people say they’ve been pressured to live as sexless creatures.

“If parents think their grown-up children are old enough to marry, they desperately seek spouses for them even if they’re not ready to get married,” Cho said. “But for parents who have disabled children, they try to do their best to lock their children up. Even if they know their children are having trouble with sexual problems, they just ignore it.”

Earlier this month, a group of centers for victims of sexual violence issued a statement saying that many disabled women are forced to get hysterectomies by their parents, while men go through vasectomies.

“For parents who have mentally challenged girls, they think it’s a hassle to take care of their children once their periods have started,” said Bae Bok-ju, head of Women with Disabilities Empathy, one of the centers that participated in the group, which is campaigning to combat the sexual harassment of disabled women.

“Disabled women are often forced to undergo abortions because their parents fear their grandchildren might be born with disabilities just like their children,” Bae said.

“Parents who raise autistic or mentally challenged children sometimes make such decisions in case their children are exposed to sexual harassment,” said Shin Yong-ho, head of the Research Institute of the Differently Abled Person’s Right in Korea, where he has been working for the past two decades.

“In fact, families are the ones who discriminate against the disabled the most. If a disabled woman wants to get married, the parents persuade the daughter not to get married because they believe she will be eventually abandoned.

“They also treat their grown-up children as if they are babies, even when they turn 50, because they think it is a way to protect them,” Shin said.

This disregard for the disabled as sexual beings can be seen even at the government level. Earlier this year, the ruling Grand National Party scrapped 480 million won ($436,363) in subsidies that would have gone to help disabled women give birth, despite a nationwide campaign to increase the fertility rate.

There are some institutions that do try to reach out and help the mentally and physically challenged lead healthy sex lives. One is the National Rehabilitation Center, located in Suyu-dong, Gangbuk District, northern Seoul. Though a state-run organization, it has a good reputation in the disabled community for its advanced sexual rehabilitation techniques, which it began offering in May 1996.

For patients with spinal disorders experiencing erectile dysfunction, doctors prescribe medication, teach patients how to give themselves injections to treat the condition or offer them special aids. Counselors help patients learn which positions will be most comfortable for them. Therapy, workshops and camps are also available for couples who have sexual problems.

“Couples have small gatherings discussing their sexual problems and sharing tips under the guidance of medical staff.”

Yu added, “If a spouse becomes disabled halfway through his or her life, it’s hard for couples to make love while staying in the hospital for such a long time. So we opened [a special room called the] Lounge for Love, where they can spend the night, in March 2000.”

Lee Beom-seok has been in charge of the center since it opened, and he is a firm believer that sex can be the best therapy for the disabled.

“Sex is the most intimate and close relationship between humans. And leading a healthy sex life helps patients and their spouses feel less insecure,” Lee wrote in his book “A Sex Guide Book for the Disabled with Spinal Disorders.”

Lee wrote, “As they restart their sex lives, they feel as though they are accepted as men or women by their spouses even though their bodies are distorted. It gives them the courage to live on.”

Some other shelters for the disabled and even religious groups have adopted a similar approach.

Hwang Kyu-in has been head of the Kyonam Hope House for the Disabled in Hwagok-dong, western Seoul, for 16 years. Eight years ago, she began offering sex education, since most of the residents at the facility are men in their 20s who are sexually active.

“The hardest thing? Most of the residents are mentally challenged, so they are having trouble understanding the sex education classes,” Hwang said.

“I think many of us have distorted images about sex. But sex is a natural part of our lives. It’s the same as eating and sleeping,” said Hwang.

Rev. Kim Jong-ryeol, a minister at Gloria Church in Jukjeon-dong, Bundang, Gyeonggi, goes even further, purchasing sex toys for the disabled in his flock.

“I started working with disabled members of the congregation in March 1999, and I’ve realized many disabled people are having family troubles, especially sex problems,” said Kim, who became a quadriplegic at the age of 27. “So I opened the Gloria Family Counseling Center about three years ago.

“Even people who suffer from diabetes often become blind because of complications. Then they face many troubles. They can’t earn money and they also suffer erectile dysfunction as one side effect. Then their wives want a divorce or they just leave. It is a common occurrence.”

Reverend Kim felt he had to do what he could to help.

“You have no idea how a little sex aid enriches the lives of the disabled.”