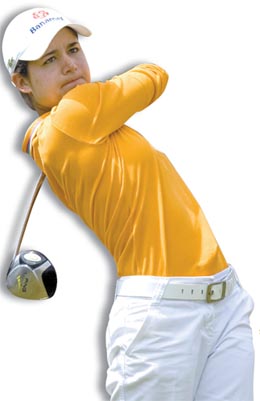 MEXICO CITY - Lorena Ochoa is retiring, just as Annika Sorenstam did two years ago, leaving the struggling LPGA Tour without its No. 1 player again and depriving the sport of one of its great ambassadors.

Ochoa, probably the best-known athlete in Mexico who is not a football player, announced her surprise decision yesterday and will discuss her plans tomorrow. The 28-year-old got married last year, setting off speculation she might be putting golf aside to raise a family. She has been No. 1 in the world the last three years and won 27 times over the last six.

“Lorena Ochoa confirms her retirement from the LPGA, as news reports in some media have said today,” her statement said. “The reasons and more details on the matter will be given by Lorena personally in a press conference on Friday in Mexico City. Lorena will share this news of a new stage in her life with her sponsors, family members and friends.”

The LPGA told The Associated Press it would not comment until tomorrow’s news conference, but said late Tuesday that Ochoa had not withdrawn from next week’s Tres Marias event in Morelia, west of Mexico City, and indicated she was expected to play. She finished fourth earlier this month in the Kraft Nabisco Championship in California, the first major of the year.

Sorenstam was 37 when she retired in May 2008, saying she wanted to pursue other interests and start a family. She now has a daughter.

The newspaper Reforma first reported Ochoa’s retirement and said she wanted to concentrate on her family and charities. In December, she wed Andres Conesa, the chief executive of Aeromexico airline. He has three children from a previous marriage.

“I must admit that I was surprised, but not shocked, when I heard the news yesterday that Lorena is going to retire,” Sorenstam said on her blog. “She has always said she would play for maybe 10 years and then leave the game to start a family. She just got married and obviously feels that she is ready for that next chapter in her life.”

Ochoa has also talked about wanting children of her own. Last year, she began traveling more, playing less and taking on more obligations, which include her charity foundation.

“Personally, it’s more important the things that I do outside the golf course,” Ochoa said last year before a tournament she hosts in her hometown of Guadalajara. “And that’s been my main focus right now.

“I will think about a family, but later on,” added Ochoa, often described as an “awesome person” by other players.

Her retirement is a blow to an LPGA Tour buffeted by the rough economy. It has only 25 tournaments on its schedule this year, 14 of them in the United States.

Sorenstam became the face of the tour by winning the career Grand Slam, becoming the only woman to shoot 59 and playing in the Colonial, the first woman in 58 years to compete on the PGA Tour. Ochoa never quite assumed that star power, playing before moderate crowds even as she was going for a record-tying fifth straight victory in Tulsa, Oklahoma, two years ago.

Ochoa was defined as much by her dominance as her graciousness. Mindful of her roots, she often would go to the maintenance barn during LPGA Tour events and speak with the workers, many of them from Mexico.

She won six times in 2006, rose to No. 1 in 2007 and captured her first major at St. Andrews the same year by winning the Women’s British Open. Ochoa’s other major was the 2008 Kraft Nabisco Championship, where she took the traditional jump into the pond with her family as a mariachi band serenaded her.

She won her fourth consecutive LPGA Tour player of the year award in 2009, narrowly holding off Shin Ji-yai. Ochoa played four times this year, with her best finish at the Kraft Nabisco Championship when she finished fourth. South Korea’s Shin is No. 2 in the rankings and Yani Tseng of Taiwan, this year’s Kraft Nabisco winner, is No. 3. Both are in position to fill the void left by Ochoa.

There is also ninth-ranked Michelle Wie, who won her first tournament last season and may have the star wattage the LPGA is looking for.