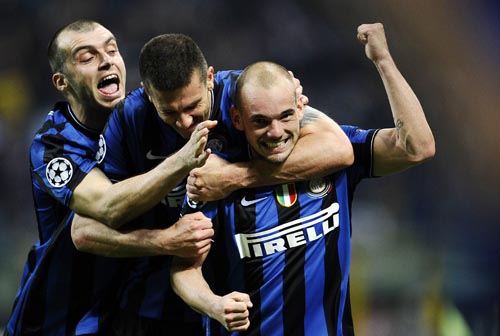 Barca lost by a two-goal margin for the first time under manager Pep Guardiola as strikes from Wesley Sneijder, Maicon and Diego Milito, after Pedro had given Barca the lead, set up a fascinating second leg at the Camp Nou stadium next Wednesday.

Barcelona captain Carles Puyol was booked and will miss the return along with Inter midfielder Dejan Stankovic.

In one of the most electric atmospheres inside the San Siro for years, both sides stretched every last sinew to the limit as Europe’s top club competition once again showed why fans the world over are so hooked on the excitement.

“Anything can happen in the second leg. We can go there and lose the game and lose the coach,” Inter boss Jose Mourinho cryptically told a news conference.

“What happened today happened, it wasn’t a dream. It was reality. We deserved to win. We saw a team working until the death. The team was destroyed by what they gave on the field.”

Inter had the better of the early chances but first blood went to Barca, forced to make a 14-hour bus journey to reach the match because of the Icelandic volcano ash restricting flights. Left back Maxwell, who quit Inter for the La Liga leaders last year, exposed his ex-teammates by reaching the byline and his pull-back was slotted home by Pedro after 19 minutes.

The 22-year-old was again preferred to Thierry Henry in Barca’s starting lineup and the diminutive livewire forward is fast looking a good bet to gatecrash Spain’s World Cup squad.

Inter, who were last European Cup winners in 1965 and are playing in their first Champions League semifinal since 2003, then demonstrated the steel-plated resilience Mourinho has instilled in his men by hitting back on the half-hour.

Argentine striker Milito, who missed two glorious chances from tight angles, turned his back on the goal when picking up the ball in the box but cleverly played in former Real Madrid playmaker Sneijder and the unmarked Dutchman slammed home.

Goran Pandev did well early in the second half to release Milito in a barnstorming break and his cut-back was scuffed home by right back Maicon, who was later taken off on a stretcher.

Milito headed in the third after 61 minutes and for a moment feared he had again been flagged offside before running to celebrate with the ecstatic Inter fans, who have been spoiled by four straight Series A titles but starved of European success.

“I congratulate them but we’ll see them next week,” said Guardiola, whose side beat Inter 2-0 at home in the group stage.

“We are in the semifinal of the Champions League against a great team, it can happen. We move forward.”

Ex-Inter striker Zlatan Ibrahimovic, booed repeatedly by his former beloved crowd, had a few sniffs at goal while Lionel Messi only had one good effort after largely being kept under wraps by the sheer brute force of Inter’s defense.

Barca pushed hard for a way back late on but Inter held firm and now have half an eye on next month’s final in Madrid.