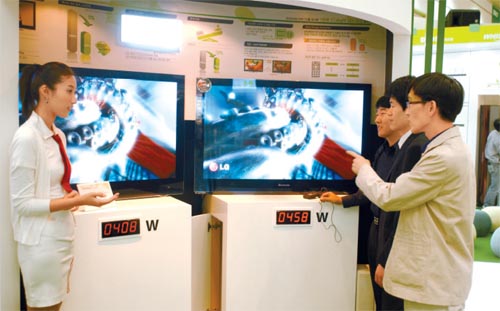 LG Electronics is working to develop energy-saving technology for its LCD and LED televisions.

In today’s business environment, companies can either go green or continue to be part of the problem.

That target is 7 percent higher than the 5.7 million tons reduced last year. That means the company plans to cut 11.8 million tons of harmful emissions in total.

That is equivalent to planting 2 billion pine trees across an area of 7,200 square kilometers - 12 times the size of Seoul. (It takes 323 newly-planted trees to eliminate one ton of greenhouse gases.)

Early last year, LG Electronics set a mid- to long-term goal to reduce 12 million tons by 2012 and 30 million tons annually for an accumulated 200 million tons by 2020. To achieve this goal, the company will carry out its reduction plan, at both the consumer level and the production level.

LG Electronics plans to increase its number of high-efficiency designs to meet its goal and adhere to its energy technology road map, or TRM, for each product line. More of its electronics will qualify for the North American “Energy Star” efficiency certification, already received by many of its air conditioners and more refrigerators will use highly-efficient linear compressors. 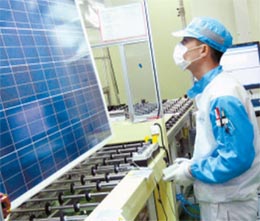 In the TV department, the company is working to develop energy-saving software and hardware and to expand its LED and LCD module technologies. Even in its LCD monitors, the company has decided to increase its use of white LED module, which uses less energy.

New technological innovations will allow the company to build some of the “greenest” factories ever. Among its new techniques, LG Electronics is planning to invest in heat recovery facilities to reuse energy produced by its daily waste incineration plants.

LG Electronics is the first company in Korea to implement a system to monitor its carbon gas emissions relative to its goals in real time. It also uses a CCMS (corporate carbon management system) and plans to increase IT investment. By relying on third parties for independent verification, LG has ensured its campaign to strengthen its energy efficiency is transparent, reliable and as inexpensive as possible.

LG Electronics CTO Paik Woo-hyun remarked, “Through our company’s efforts to reduce greenhouse gas emissions, we cut 5.7 million ton last year, exceeding our goal by 50 percent. This year, through technology development and the efforts of all our employees, we will achieve our goal for 2020 earlier than expected.”

The accomplishment Paik referred to last year was equivalent to planting 1.9 billion pine trees on 6,600 square kilometers of land, 11 times the size of Seoul.

At the production level, the company also changed its method of washing and drying electronic parts and reducing the time required to produce a single part.

In addition, LG Electronics revamped its ability to manage and record greenhouse gas emissions to enable it to measure specific fossil fuel use and emissions and help it spot areas with the potential for savings.

At the consumer level LG Electronics aims to increase its proportion of high efficiency products to 15 percent compared to 2007 by 2012.

In acknowledgment of these efforts, LG Electronics was chosen as the top company in Korea by the Carbon Disclosure Project Korean Committee in October 2009.