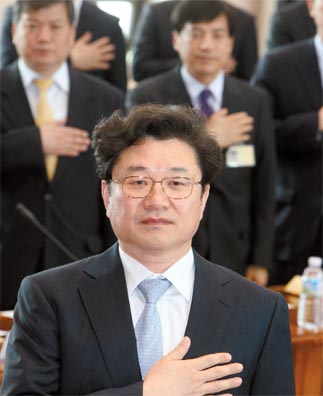 Korea’s top prosecutor yesterday vowed to take a thorough look into allegations that regional prosecutors have been taking bribes for more than two decades, and said if they are found to be true, it would be an “embarrassment” for the nation’s justice system.

Presiding over an emergency meeting of senior prosecutors yesterday, Prosecutor General Kim Joon-gyu said the truth must be found first and then “firm measures” should follow.

Kim called the meeting after MBC’s current affairs program “PD Diary” on Tuesday night aired a feature on a bribery scandal allegedly involving dozens of prosecutors. In the program, a South Gyeongsang-based construction worker named Jeong alleged that he bribed about 100 regional prosecutors from 1984 to 1999 with cash, gifts, meals and sex worker services. The program’s production team said it wanted to investigate long-held suspicions that prosecutors received bribes in exchange for favorable handling if bribers got into legal trouble.

“If these allegations are all true, then it would be embarrassing and shameful,” Kim said. “If there have been some wrongdoings in the past, then they must all be eliminated.”

Justice Minister Lee Kwi-nam also called for an exhaustive investigation into the allegations and said the public sector “should get its act together.”

Kim also began the prosecution’s own investigations into the allegations. According to Cho Eun-seok, spokesman for the Supreme Public Prosecutors’ Office, an investigative team led by an outside expert will be appointed. To assure its impartiality, about two-thirds of the team, which will have up to nine members, will be from outside the prosecution office, the spokesman added.

In addition, a separate internal investigation team will be formed, led by Chae Dong-wook, the chief prosecutor of the Daejeon High Prosecutors’ Office, with up to eight prosecutors. Jeong, the construction company owner who made the allegations, and implicated prosecutors could be summoned for questioning this week.

“As a member of the prosecution, I feel terrible about the situation,” Chae said. “I fully understand the gravity of the matter. Our team will get to the bottom of it as quickly as we can.”

The Internet home page for the Supreme Public Prosecutors’ Office crashed because of heavy traffic yesterday, and angry members of the public posted messages against prosecutors.

Two senior prosecutors were identified in the PD Diary segment. Jeong argued he had treated Park Ki-joon, head of the Busan District Prosecutors’ Office, and Han Seung-cheol, chief inspector at the Supreme Public Prosecutors’ Office, to meals and sex worker services. In the program, Park and Han denied the allegations, but PD Diary also aired testimonies by restaurant and bar owners who confirmed they had served the prosecutors.

The program also played recorded cell phone conversations between Jeong and Park. In one exchange, Park is heard as telling Jeong, “We’re like brothers. We’ll stay tight for a long time.”

A producer of the program called Park to confirm his connection with Jeong. Park was heard saying he met Jeong a couple of times but had never received a bribe from him.

When pressed by the producer, Park bristled and said, “Why should I answer your questions? This guy [Jeong] is trying to fabricate evidence in court and you’re trying to help him.”

After the program aired, Park told the JoongAng Ilbo that his comments were taken out of context and the PD Diary edited out his warnings of a possible defamation suit against the station. When asked about the recorded phone conversations, Park said he couldn’t recall the exchanges.

The PD Diary segment said Han received 1 million won ($900) in cash from Jeong on March 30, 2009 after a dinner paid for by Jeong. Jeong told the program he had treated Han to meals and drinking outings on more than 10 occasions.

In the segment, Han was heard denying even knowing Jeong.

“Who is that man?” Han said when asked about Jeong. “I don’t know of any good reason that I would have invited that man for dinner.”

This isn’t the first bribery scandal in the justice system. Min You-tae, chief of the Jeonju District Prosecutors’ Office, resigned last fall after receiving $10,000 from a lobbyist. In 2006, a carpet importer named Kim Hong-su acted as a broker for defendants to bribe judges, prosecutors, attorneys and police officers. Cho Kwan-haeng, then a prosecutor at Seoul High Court, stepped down from his post.