Seoul has big designs on Dongdaemun

Seoul has big designs on Dongdaemun 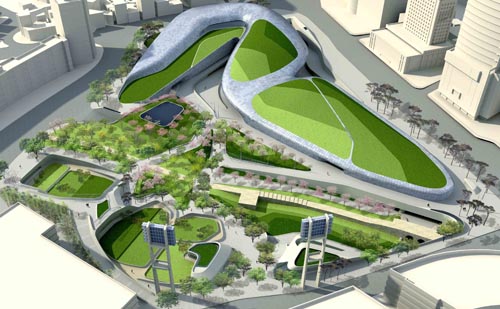 An artist’s rendition of the Dongdaemun Design Plaza and Park. Provided by Seoul Metropolitan Government

Dongdaemun Design Plaza and Park, currently under construction, will be a launching pad for international and local designers to showcase new work, the Seoul Metropolitan Government announced yesterday.

In addition, visitors will be able to expand their design horizons by accessing information, expertise and displays at its museum and library.

The development will be four stories above ground and three stories below in an 81,210-square-meter (20-acre) space where Dongdaemun Stadium used to stand. Zaha M. Hadid, who won Pritzker Architecture Prize in 2004, designed the new venue.

The development will be completed in December 2011 and will open in June 2012.