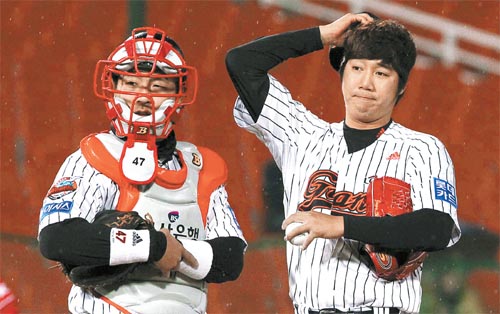 Lotte starting pitcher Jang Won-joon looks puzzled after giving up a run in the April 21 home game against the Kia Tigers. [YONHAP]

Same old song, different lyrics. As the Lotte Giants struggle out of the gate for the second season in a row, this time it’s the team’s pitching, not its offense, that’s giving coaches the blues.

Manager Jerry Royster had been counting heavily on Cho Jung-hoon, Song Seung-joon, Jang Won-joon, Ryan Sadowski and Son Min-han, and in the preseason the roster was seen as one of the league’s strongest.

But things aren’t going as planned. In the eight-team league, the Giants are currently sitting in sixth place with a record of seven wins and 13 losses as of yesterday.

Sadowski has yet to pick up his first win in the Korea Baseball Organization, and racked up four losses before he went on injured reserve with a bad elbow.

Sohn, too, is recovering from an injury, and isn’t expected to return to the lineup until July. Lee Myung-woo has filled in admirably by tossing 18 and two-thirds innings in three games, but his ERA sits at 6.75.

To make matters worse, the bullpen pitchers are failing to pick up the slack for the starting rotation. Lee Jung-hoon and Lim Kyung-wan played a big role as middle relievers last season, but this year they’re sweating to carry the load.

Take a look at the April 9 game against the Hanwha Eagles. The Giants had led 11-3 into late innings, but they went on to lose the game. 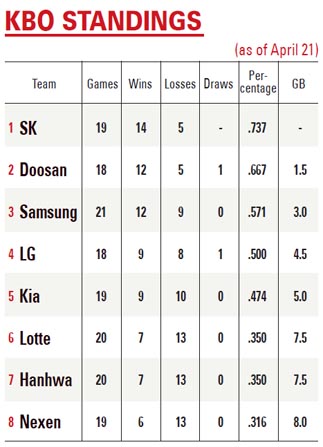 Or the April 21 match-up against the Kia Tigers. Without a viable option as the game went into extra innings, the Giants went with closer Lee Jung-hoon. Lee eventually gave up a home run to Choi Hee-seop to lose the game 9-6.

In contrast, the Samsung Lions are off to a solid start after narrowly missing the postseason last year. The Lions currently sit in third place with a record of 12 wins and nine losses.

One player who has exceeded expectations is inexperienced yet speedy outfielder Lee Young-wook. Having appeared in 102 games over the past three seasons, Lee has been inserted into the starting lineup as the leadoff hitter and he’s responded well.

Lee has played in 21 games so far this season and his production doesn’t pale in comparison to other leadoff hitters in the league. He’s currently hitting .288, with three home runs, 17 runs scored, 12 RBI and seven stolen bases. Lee is ranked second in the league in runs scored and tied for fourth in stolen bases. Having been thrown out once, his success ratio on steal attempts is at 87.5 percent. He has set his goal at 30 stolen bases for the season and is on a good pace to meet that target.

Despite his good showing, Lee still has a lot of work to do. His inexperience makes him weak against southpaw pitchers. Lee is currently batting only .130 (three for 23) against lefties, and leads the league in strikeouts, with 23.

“I need to become a better contact hitter,” he said. “Even if I were to make a slight contact, I can try to stretch it out for an infield hit.”