During the early months of the post-invasion period in Iraq, Sgt. First Class William James (Jeremy Renner) becomes the new leader of an Explosive Ordnance Disposal unit with the U.S. Army’s Bravo Company, after Sgt. Matt Thompson (Guy Pearce) is killed by a remote-detonated improvised explosive device in Baghdad. When James arrives on the scene, Bravo company has 39 days left on its current deployment. He is passionate about what he does and dives into his new assignment. His fellow squad members, including Sgt. JT Sanborn (Anthony Mackie) and Specialist Owen Eldridge (Brian Geraghty), just want to survive their last days of duty. James and his squad members clash when he takes risks that push them all to the edge. 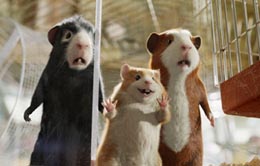 This is producer Jerry Bruckheimer’s first 3-D film, a comedy adventure about the latest evolution of a covert government program to train animals for espionage work. A group of guinea pigs, trained by the government and armed with the latest high-tech spy equipment, soon discover that the fate of the world is in their paws. The G-Force team consists of squad leader Darwin (voiced by Sam Rockwell), outrageous weapons expert Blaster (voiced by Tracy Morgan), sexy marital arts pro Juarez (voiced by Penelope Cruz), fly-on-the-wall reconnaissance expert Mooch and computer and information specialist Speckles (voiced by Nicholas Cage). The team takes on a mission to stop evil billionaire Leonard Saber (Bill Nighy), who plans to destroy the world. But the government suddenly shuts them down and the team is sentenced to a pet shop. The team and their new friends, Hurley (voiced by Jon Favreau) and the hamster Bucky (voiced by Steve Buscemi), try to escape to defeat the villain and save the world. 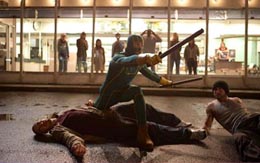 High school student Dave Lizewski (Aaron Johnson), a comic book fan, decides to turn his obsession into a profession and becomes a real-life superhero - with no powers. He calls himself Kick-Ass, and wears a flashy wet-suit. Before long, Kick-Ass has become a local sensation. After meeting Big Daddy (Nicholas Cage) and his daughter Hit-Girl (Chloe Moretz), who are a crime-fighting duo, his life is forever changed. The duo have set their sights on local mob heavy Frank D’Amico (Mark Strong), and is doing a decent job of dismantling Frank’s underworld empire when Kick-Ass is drawn into the fray. But Frank’s men play rough, and his son Chris (Christopher Mintz-Plasse) is about to become Kick-Ass’ first archenemy. When Chris assumes the persona of Red Mist, the stage is set for a superhero showdown that could spell the end of Kick-Ass once and for all.

A young Englishman, John Whittaker (Ben Barnes) marries Larita Huntington (Jessica Biel), a glamorous American blonde who races cars for a living. When the couple visits the Whittaker family estate, reality sets in when they meet Whittaker’s mother, who is shocked and concerned about her son’s new spouse. The battle of wits between the two women soon escalates, and the couple’s marriage begins to suffer.

Loosely based on an urban legend about a set of haunted train tracks, the film follows a young girl, Melanie (Leah Pipes), who was recently released from rehab as she moves back in with her parents. One day, her sister Crystal (Kristin Cavallari) tells her about an accident that occurred in 1957, when a school bus collided with a bus full of school children, killing everyone on board. The urban legend says that if you put the car on the accident site, the dead children will push the car, leaving their fingerprints behind. When Melanie begins to see the children, she tries to discover the truth behind the fatal accident.

Based on the 1998 biography by the same name, this film tells the story of a woman who achieves stardom against all odds. Waris Dirie (Liya Kebede) was born in Somalia, grew up poor, and is sold to an elderly man for an arranged marriage at 13. She escapes to her grandmother’s home, only to be sent to London to work. Her life is forever changed when she is discovered by a professional photographer, Terry Donaldson (Timothy Spall), who turns her into a supermodel. Later, she becomes the first woman to speak publicly about her circumcision and becomes the special ambassador for the Elimination of Female Genital Mutilation for the United Nations.