Jumble of genres won’t make this film a ‘Bestseller’

Jumble of genres won’t make this film a ‘Bestseller’ 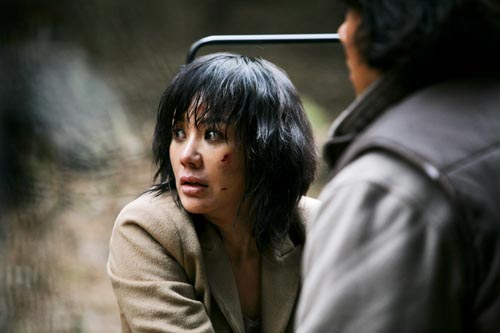 When a friend asked what kind of film “Bestseller” is, I found myself hesitating.

It starts out as a thriller-drama, about a bestselling author who falls under suspicion of plagiarism. Then it steps into the horror film territory midway, and finally finishes like an action flick.

This feature-length debut by director Lee Jeong-ho has grand ambitions, and they are the film’s greatest strength and weakness.

Despite the slump in the local movie sector, more than 4 billion won ($3.6 million) was spent on this film. Prominent actress Uhm Jung-hwa plays the tortured author, giving one of her most memorable performances to date.

When rumors begin to swirl that Baek Hui-su (Uhm) plagiarized her last book, her life starts to unravel, her relationships with her husband and daughter most of all. At the suggestion of her publisher, Hui-su decides to go with her daughter to a deserted mansion in a rural village to complete her next book in peace.

Hui-su’s daughter tells her about an invisible woman in the house who speaks to her, and Hui-su decides to base her next book on her daughter’s version of what the woman said. When Hui-su’s book is published, she is again suspected of plagiarism, driving her to find out who exactly her daughter was talking to.

From the subject matter to the hard-boiled visuals, Bestseller is edgy and masculine. The pace is fast, even abrupt, with a clear, sturdy beginning, middle and end.

Although there are many horror or thriller cliches in the film - a haunted house inside a deserted forest, a ghost and a main character with a dark past - the director manages to make them seem relatively fresh with unpredictable editing and genre-mixing.

Instead of relying on sleek, sophisticated visuals like many Korean thrillers have lately, the transition between each cut in Bestseller is rough and fast-paced.

Considering its subject, plagiarism, has haunted the entertainment industry in Korea in recent years, addressing it in a cross-genre film like this one might have been a gutsy move.

Unfortunately, these themes turn out to be mere props in an overcomplicated plot.

Although Uhm delivers a solid performance as the author struggling to hold onto her sanity and her family, her acting doesn’t save the narrative from feeling fragmented. By the time the audience is about ready to engage the subject of plagiarism and the author’s torment, the film transforms all of a sudden into a tale about a modern-day mother who feels guilty for not spending enough time with her daughter.

In fact, there is little philosophical insight into plagiarism or the disintegration of the modern family. These themes are incidental, and aren’t given enough time to ripen during the film. In the end, the audience is left feeling that the plagiarism angle is just another marketing hook. It’s a shame, too. Director Lee had a real chance to take a leap into the unexpected - too rare in cinema these days.