Getting the poison off our plates

Getting the poison off our plates 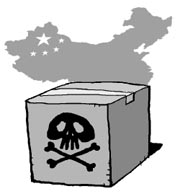 The Yellow River, the second-longest river in China, is about to vanish off the face of the earth because its water sources are exhausted. Experts worry that the river will go dry in as little as 10 years. At the dawn of civilization, China was a warm and fertile land where elephants and rhinos roamed. Today, however, China has the highest rate of desertification in the world. The main culprits are indiscriminate logging and development.

The Yellow River is not dead yet. It springs back to life during the rainy season, which lasts about two months, but later turns into a ribbon of poison because the river bed is so terribly contaminated. In 2003, an international environmental organization estimated that around 20 billion tons of pollutants pour into China’s rivers per year. That is equivalent to the total amount of pollutants discharged by the United States, Japan and India combined. Today, it is not even possible to estimate the amount of waste China discharges. About 700 million Chinese, or half of the population, drink contaminated water.

That doesn’t even account for the goods made poisonous by man. In Qingdau, they sell poisonous allium tuberosum. On Hainan Island, they found poisonous bean pods, a result of contaminated water and poisonous fertilizer in cultivation. The official Xinhua News Agency even criticized local government officials, demanding that they “supervise the market properly.”

The problem goes beyond vegetables. In Jiangsu Province, people produce “beautifully-colored noodles” by mixing lime powder and diesel fuel with flour. Even more troublesome are the problems with the meat, eggs and milk. According to a survey conducted by China’s sanitary authority, there are a lot of antibiotics and hormones in the meat, pork and chicken sold in the market. This is because the substances are mixed with the animals’ feed are transferred to the human body, and as a result the body becomes filled with agricultural pesticides, antibiotics and hormones absorbed from vegetables, grain and meat. It was also found that they used bleaching agents such as peroxide or sulfur to make foodstuffs look clean.

A food hygiene specialist with the Chinese sanitary authority said: “Human organs can be seriously damaged if people eat foodstuffs contaminated with a lot of antibiotics and bleaching agents.” He further explained that the body’s tolerance of germs weakens with an accumulation of poisonous substances.

The sanitary authority of Incheon is set to release its food poisoning prevention index this month, but we need to be more alert for poisonous Chinese grain and vegetables and find ways to prevent them from getting to our tables.

The volcanic ash from Iceland will blow away with the wind, but poisonous foods from China can still pour into Korea without the help of a storm.