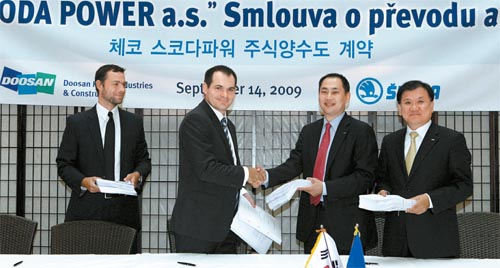 
For the first time, Fortune magazine selected Doosan as one of its top 500 global companies in 2009. Doosan Heavy Industries and Construction was also named fourth on a list of the world’s top 40 companies by U.S. magazine BusinessWeek and prominent consulting company AT Kearney.

It received high marks for its diverse business portfolio, which is based on power plants, desalination equipment and construction. The company also developed and secured original, environment-friendly technology for the future such as the Integrated Gasification Combined Cycle (IGCC).

Doosan celebrates its 114th anniversary this year. It may be Korea’s oldest company, but it’s also changing and growing quickly. The firm calls itself “Young Doosan” because continuous change and the ability to adapt to a new environment are the driving forces in the DNA of Doosan.

In 1996, on the occasion of its 100th anniversary, Doosan undertook a bold reorganization to ensure it would rise as a global company in its next 100 years. Change came quickly. Doosan overhauled its business portfolio based on consumer goods and started searching for new growth engines. The infrastructure support business, or ISB, caught the group’s attention. The ISB market is several thousand trillion won across the world each year, including roads, railroads, port, airports, energy, military bases, production facilities, logistics and distribution. 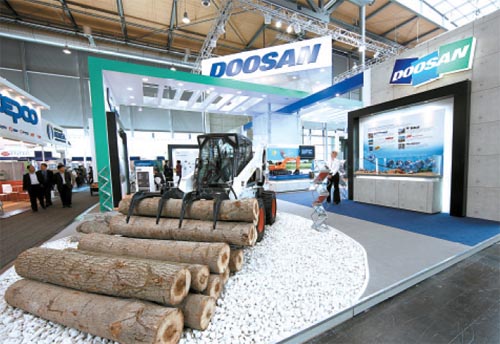 Bobcat equipment is on display at the Doosan Infracore booth at an industrial fair in Hanover, Germany in April 2009.

The transformation into an ISB company started in 2001 when the group took over HANJUNG, which it renamed Doosan Heavy Industries and Construction. The unit exited the low-profit steel and chemical businesses and concentrated on power generation and desalination. Sales, which were 2.4 trillion won with a 24.8 billion won net loss in 2000, grew to 8.12 trillion won in sales with a 614.5 billion won operating profit in 2009. Later, Doosan acquired Korea Industrial Development Company and Daewoo Heavy Industries & Machinery.

Not satisfied with its solid position in Korea, Doosan acquired several foreign companies including a boiler engineering company, a desalination company, an environment-friendly engine maker and a small construction equipment producer. In 2008 Doosan Heavy Industries and Construction acquired 15 percent of Canada-based HTC, which owns original carbon capture and storage (CCS) technology. In 2009 it acquired Skoda Power in the Czech Republic, which owns technology in the turbine manufacturing industry, completing its “full line-up” of acquisitions from boiler to turbine to power plant.

Doosan’s goal is to become one of the top 200 companies in the world by 2020. Y. H. Park, the chairman of Doosan, remarked in his New Year speech, “This year is the beginning of a new decade. For the past 10 years, Doosan has achieved remarkable outstanding development and growth. Now we should write a new history for Doosan, and by 2020 when this decade ends, we will be one of the top 200 companies.”

To continue at this pace, Doosan will exercise development strategies based on selection and concentration, reinforcing and strengthening itself to prepare for an economic recovery and to secure financial soundness. To ensure a good relationship with the community, Doosan will also spend more effort on its social contributions. The company has already started sponsoring cultural and aid activities overseas.

The conglomerate will continue to concentrate on ISB, working not just to penetrate any overseas market but to select only markets and products that will create high value and profits. To do this, the company will maximize synergy with its overseas subsidiaries Bobcat, Babcock and Skoda Power and concentrate on developing environment-friendly facilities to produce new renewable energy.