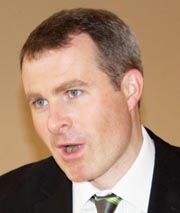 The shock waves rippling across the global financial community from the civil fraud charges levied on Goldman Sachs have given rise to investor concerns over Korea-based Samsung Life’s upcoming initial public offering, as the beleaguered U.S. giant investment bank is one of the underwriters in the deal.

Samsung Life, which ranks as Korea’s biggest insurer, is slated to issue public stock on May 12. With Goldman playing a key role in the IPO, some observers are worried that Samsung Life’s stock price could fall when it debuts on the market, citing concerns that the company’s current woes might distract it.

“Honestly, I don’t think it matters that much to the IPO price,” Pogson said Wednesday in a joint interview with the JoongAng Daily and JoongAng Ilbo during a two-day business trip to Korea.

“As an international person involved in the financial community, if I wanted to get involved in the insurance sector in Korea, Samsung Life would be the obvious company to invest in. It’s the biggest player [and has a] strong brand. Usually we see the top three, four or five companies in the sector substantially outperform the rest of the market.”

He also added that some experts engaged in finance-related jobs often refer to Samsung Life as the Korean version of Berkshire Hathaway, a diversified company with major interests in a variety of businesses such as life insurance, annuities and jewelry.

Pogson said he believes that Goldman Sachs will be able to handle the Samsung Life IPO adequately as the U.S. company has long been considered one of the top investment banks in the global financial market.

“Underwriters are there to give stability to transactions and, if something goes wrong, pick up the pieces,” Pogson explained. “The reason for picking Goldman as an adviser is because I presume you have confidence in the team. The team that executes the deal will be a good one.

“From my experiences, guys from Goldman Sachs are some of the best in the industry as investment bankers. And I think they would do a quality execution.”

Pogson said the most important factor in the initial price of Samsung Life is how market participants perceive the company in particular rather than the overall health of the global markets.

“If New York is having a bad day, will Samsung Life debut at half the price? No,” he said.

Pogson has been working in the investment, banking and financial services sectors for 19 years since joining Ernst & Young in 1991. He became a senior executive in the firm’s Far East Asian region in 2007.