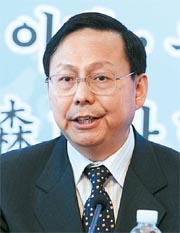 Breaking nearly a month of silence, China this week called the sinking of the South Korean naval ship Cheonan “a tragedy” and hoped for a thorough investigation.

“We take note that [South Korea] plans to carry out scientific and objective investigation and believe the issue will be properly handled,” Jiang said, according to the English-language transcript posted on the ministry’s Web site.

Zhang Xinsen, Chinese ambassador to Seoul, yesterday met with South Korean journalists for the first time since he arrived in late March. He sent condolences to the victims’ families and called the sinking “an unfortunate incident.”

Zhang evaded a question about what China would do if North Korea is found responsible.

“I understand South Korea is cooperating with other countries in carrying out the probe,” the ambassador said. “It’s China’s hope that this matter will be handled properly. The stability and peace on the Korean Peninsula also corresponds to the interests of other [neighboring] countries.”

China took time to comment on the incident because of its ties to North Korea, analysts said, which is suspected in South Korea of having attacked the Cheonan. There was public disgruntlement in Korea over China’s silence, compared to quick condolences from the United States and Japan.

“China used a neutral term like ‘unfortunate incident’ but they could’ve expressed the sentiment much earlier,” a diplomatic source said yesterday. “China was too conscious of North Korea and probably erred on the side of caution.”

Hours before Jiang made her comments, South Korean Foreign Minister Yu Myung-hwan was asked about China’s silence during his monthly press conference. Yu said China had sent condolences through diplomatic channels and he believed China was being extra careful “because this wasn’t an ordinary event and it involved a warship.”

Both Zhang and Jiang called for “proper” handling of the investigation. Another source interpreted the comments as suggesting that Seoul shouldn’t accuse North Korea of an attack before obtaining convincing evidence or take “improper” steps such as military action.

Discussing inter-Korean relations, Zhang said both Koreas are friendly to China and that China supports inter-Korean dialogue for the sake of stability and peace on the peninsula.

When asked if China would still support dialogue if North Korea turns out to be responsible for the Cheonan sinking, Zhang said, “That’s not an accurate interpretation. I am trying to make a point that no diplomatic achievement would be possible without exhaustive negotiations and communication.”