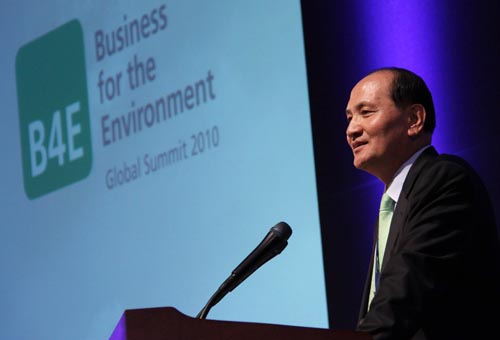 Change starts with each individual, especially when it comes to saving the planet, President Lee Myung-bak said during his speech at the fourth annual Business for the Environment Global Summit yesterday, which was Earth Day.

The three-day event, with attendance either in person or by video by Nobel Prize winner Al Gore, Virgin Group founder Richard Branson and U.S. film director James Cameron, will see around 1,000 government, business and nongovernmental organization leaders from around the globe. Topics spanning renewable energy, climate change polices, resource efficiency and new “green” business models will be discussed. Discussions at the summit will be webcast on the Internet around the world.

“I am not at all saying that we should forego economy for the environment. I believe that the environment and the economy need to coexist and think this is possible,” Lee said at COEX, southern Seoul, where the global environmental summit is being held until today.

The president emphasized that the four rivers restoration project, which his administration launched last year with an investment of about 22 trillion won ($19.8 million), is a “representative Green New Deal project that will protect the environment and enable economic growth all at once.”

The controversial four rivers project includes cleaning up and developing Korea’s four major rivers - the Han, Nakdong, Geum and Yeongsan - and their banks, though opponents say the project will ruin the rivers’ natural ecosystem. Lee added that the Global Green Growth Institute will launch in Korea this June.

During a speech at the summit, Nam Yong, LG Electronics’ vice chairman and chief executive officer, said that an average $100 a month is spent on electricity in U.S. households but that this could be reduced to $80 with energy-efficient products or solutions. “Investment in research and development is crucial to green growth and LG Electronics is highly interested in business models for this effort,” he said yesterday. “[LG] is developing energy-related technology to make green building possible and within five years, this will be one of our main growth engines.”

UN Secretary General Ban Ki-moon urged companies around the world to join the UN’s effort for sustainable development in his video message opening address, saying, “We will face huge risks unless [we] adopt the path of a green economy.”

The global environmental summit is co-hosted by the United Nations Environment Program, the UN Global Compact, the World Wide Fund for Nature and Korea’s Ministry of Environment.