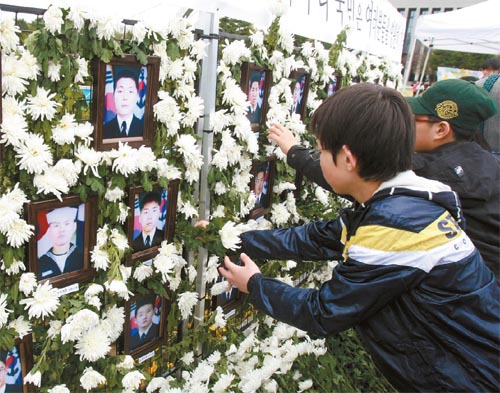 Elementary school students place flowers next to photos of the sailors that died on the naval ship Cheonan during a memorial event at the National Assembly in Seoul yesterday. The Defense Ministry said yesterday that it would consider setting up mourning altars at major public places across the nation. [AP/YONHAP]


The government firmly denied yesterday that Seoul and Washington have agreed to postpone the transfer of wartime operational control.

“Some media reported that President Lee Myung-bak and President Barack Obama of the United States discussed the wartime operational control during the recent Nuclear Summit in Washington, but the reports are not true,” the Blue House said yesterday in a press release. “The two countries have never officially discussed the issue.”

South Korea and the United States agreed in 2007 that South Korea will regain its wartime operational control of the military, currently held by the United States, starting April 17, 2012. Noting the persistent threats posed by North Korea, conservatives in the South have called for a delay of the transfer, although Seoul and Washington have officially said the handover is progressing as planned.

The Dong-A Ilbo reported yesterday morning that Washington and Seoul have agreed on the delay, quoting a senior South Korean official. The delay could be announced during a bilateral summit on the sidelines of the Group of 20 Summit in Canada in June, the report said.

The report also said Lee and Obama discussed the issue when they met at the Nuclear Security Summit in Washington last week.

Foreign Minister Yu Myung-hwan also denied the report before lawmakers yesterday. “The two presidents discussed the Cheonan’s sinking, but the report about the delay in the wartime control transfer is not true,” Yu said.

He, however, did not deny that the two countries have discussed a possible delay. “It’s inappropriate to openly talk about the details right now,” Yu said, when asked if there were talks.

A senior Blue House official also denied the reports, saying he was concerned about Washington’s reaction to them.

“The governments did not even begin a discussion, and the U.S. side will probably think that we are using the media to push the issue,” he said.

The conservatives’ request to delay the transfer was reiterated yesterday when President Lee had lunch with retired generals to discuss the Cheonan’s sinking and military reform. Many of the 22 participants appealed for the delay, Blue House spokesman Park Sun-kyoo said, adding that they also emphasized the need to bolster the alliance with the United States during the current security crisis.

“The Cheonan’s sinking provided an opportunity to think about the transfer,” one of the participants was quoted as saying by Park. “We hope the president will think about this matter seriously.”

Park said Lee did not give an immediate response, but gave a nod as an indication that he will consider their proposal.