Toys are culture too at Son Won-kyung’s museum

Toys are culture too at Son Won-kyung’s museum 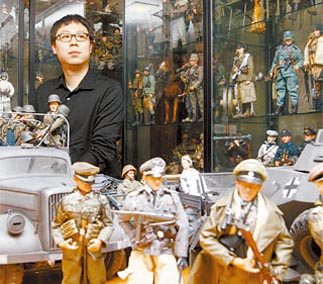 Son Won-kyung stands with some of his action figures at his museum in Samcheong-dong, southern Seoul. By Choi Jeong-dong

“When I became a man, I put away childish things.” So wrote the Biblical apostle Paul.

But in Korea, there’s one man who’s grew up, and for 25 years kept collecting childish things, eventually putting 400,000 of them away in a museum.

Son Won-kyung, who founded the ToyKino Museum in Samcheong-dong, central Seoul, said, “Even though it’s been five years since I opened the museum, some people still treat it as a joke.”

Strictly speaking, the museum isn’t limited to toys. As its name implies, it’s also full of movie memorabilia. Son was born in 1974, and most of his collection centers around movies from that decade, like “Star Wars” and “Indiana Jones.” 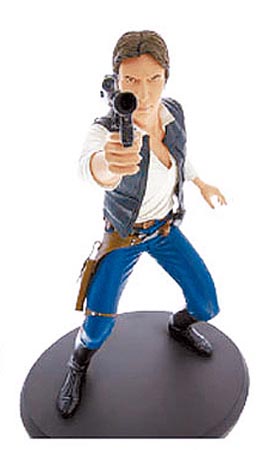 A figure of Han Solo from “Star Wars,” one of the main focuses of the ToyKino Museum. By Choi Jeong-dong

The founder took out a notebook labeled “Son Won-kyung’s Hollywood Scrapbook, 1984.” Written in uneven handwriting, it’s full of movie titles from the 1950s to the ’80s, each with a summary, director, year and leading actors: “In Love and War,” “The Blue Max,” “Jaws,” “Bus Stop.”

“With the materials that I collected since I was in first or second grade, I finally made the scrapbook in 1984. It usually takes long time for me to do something.

Son would copy film music by putting a tape recorder in front of the TV. His book even includes lines from and newspaper clippings about the films.

“When I was 7 years old, I practically jumped up and down in joy over the toys that my father bought overseas. After that, when I was in eighth grade, I saw an action figure for the first time at a mall selling imported goods. I wanted to get it, but I hesitated. The next day, I began to buy and collect. It accelerated in my 20s, and I went crazy during my 30s.”

In the late ’80s, a fancy import shop opened in Apgujeong-dong, southern Seoul. Decorators would go there for movie posters and props, which were popular in Korea’s coffeehouses at the time. Soon Son was buying his action figures there. When the Internet era began in the late ’90s, Son started buying direct from overseas. The action figure market grew tremendously with the paradigm shift brought by Todd McFarlane’s “Spawn.” And Son’s collection began to diversify and expand by up to 10,000 figures a month.

“At that time, I thought it would make me happy to open a museum, even though I might end up living in a tin-roofed shack.”

In 2006, that dream was realized when Son rented two buildings in Samcheong-dong.

“After opening it, my collection seemed even smaller because I realized what I liked and what I needed. Meanwhile, similar museums also opened, and action figures became popular. I think collecting is enough for me.”

Son has accumulated action figures from the new entries in the Star Wars, Indiana Jones and “Superman” franchises, but nothing from “Terminator Salvation,” because he said he has too many from the previous films.

He’s also currently writing nine books about movies. Last year, he held a private exhibition of pictures based on his toys that was well received.

But costs are starting to catch up with him. Son recently had to close both his museum at the Heyri Artist Valley in Paju, Gyeonggi, and one of the museums in Samcheong-dong.

Describing his philosophy, Son said everyone should respect each other’s diverse cultural tastes.