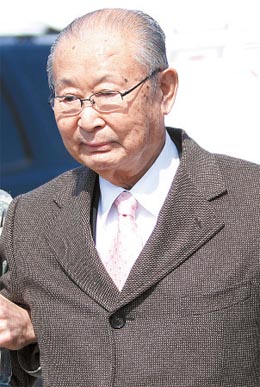 General Paik Sun-yup, the Army chief of staff during the Korean War, will receive the 2010 Van Fleet Award from the Korea Society, a U.S.-based nonprofit organization that exists to foster ties of friendship between Korea and the United States, a diplomatic source told the JoongAng Ilbo on Wednesday.

“General Paik is invited to attend the Korea Society’s annual dinner as an honoree on June 2 in New York,” the source said.

Named after General James Van Fleet (1892-1992), commander of the U.S. Eighth Army at the height of the war from 1951 to 1953 and the first president of the Korea Society, the award has been given since 1992 to Koreans or Americans who contributed to improving bilateral relations and the Korea-U.S. alliance. The award is usually given out at the organization’s annual dinner.

Born in 1920 near Pyongyang, Paik was the commander of the First Army Division, the first South Korean unit to enter Pyongyang during the Korean War. Paik later became Korea’s first-ever four-star general. He was credited for leading his troops to victories in several major battles.

Paik served two terms as chief of staff and spent another 10 years as a diplomat in France, Canada, the Netherlands and Belgium before establishing Korea’s first subway line as minister of transportation in the 1970s. From 1971 to 1980 he also served as the head of several domestic chemical companies.

He wrote the “Korean War Remembered” series for the JoongAng Ilbo, recalling in vivid terms his experiences during the battles of the Korean War. A translated version of the series is now appearing weekly in the JoongAng Daily.

Past Van Fleet Award honorees include former U.S. presidents Jimmy Carter in 2000 and George Herbert Walker Bush in 2005, as well as former Korean President Kim Dae-jung in 2007 and Samsung Chairman Lee Kun-hee in 2006.