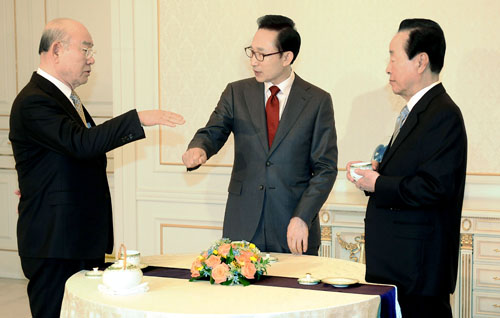 Two former presidents yesterday added their voices to the chorus of suspicion of North Korean involvement in the sinking of the Navy corvette Cheonan, as Kim Young-sam and Chun Doo Hwan talked to President Lee Myung-bak about their experience of armed provocations from Pyongyang.

The former leaders urged Lee to take stern countermeasures if the North is proved to be behind the disaster, and to seek Beijing’s cooperation, the Blue House reported.

Chun and Kim lunched at the Blue House as Lee continued a week of meetings with political, religious and military leaders about security on the Korean Peninsula.

Chun, who served as the South’s president from 1980 to 1988, spoke about the North’s attempt to assassinate him in 1983 in a bombing in Burma that killed 17 members of his entourage, including several cabinet ministers.

“[North Korean leader] Kim Jong-il was behind it,” said Chun. “General Kim Kyok-sik was the person in charge. At the time, he was the chief of the General Staff, but he was appointed commander of the Fourth Army Corps in February of last year. And the Fourth Army is in charge of the area where [the Cheonan] sank.”

Chun was also president when a time bomb exploded a Korean Air jet in midair in 1987, killing all 115 passengers and crew members aboard. Two North Korean spies were blamed for the bombing, though Pyongyang denied involvement.

Kim, the president of South Korea from 1993-1998, also spoke critically about the North. He said that during his tenure, in 1996, armed agents from North Korea tried to infiltrate South Korean territory by submarine. Of the 25 agents who landed on the South’s east coast, 24 were killed and one was captured alive. More than 10 South Korean soldiers and civilians died during the 49-day operation to stop the infiltrators.

“North Korea is a country where the military controls everything,” Kim said. “My mother was also killed by an agent when I was a lawmaker.”

Speculation about Northern involvement in the Cheonan’s sinking in disputed waters near the inter-Korean border on March 26 has grown rapidly since the initial examination of the salvaged hull indicated that an external explosion brought down the warship.

During his meeting with the former presidents, Lee said he has received both direct and indirect proposals from the North for an inter-Korean summit. “But I have made clear my principle that I will not sit down for a summit with a political intention,” Lee was quoted as saying by his spokesman Lee Dong-kwan. The Blue House said Kim and Chun agreed with Lee’s principle.

Despite the suspicions, Lee told the former presidents that Seoul will not jump to conclusions, but will respond sternly after scientific tests determine the cause of the sinking.

Yesterday, he also told senior journalists from around the world that South Korea is working with the international community not only on the investigation, but on a response to the crisis.

“We are waiting for a final outcome to the probe and will decide our response prudently,” Lee said on the sidelines of a summit of the Organization of Asia-Pacific News Agencies.

In his meeting with the CEOs and senior executives of 44 newswire companies from 35 countries, Lee said experts from several nations, including Sweden, have joined the scientific probe and their findings will be announced to the world.

Lee also said that the 2012 nuclear security summit in South Korea will help persuade Pyongyang to give up its nuclear arms programs.

“As Korea prepares for the second Nuclear Security Summit, we hope that the six-party talks will help resolve the North Korean issue through diplomatic dialogue,” Lee said.