Gov’t to honor lost sailors and their ship

Gov’t to honor lost sailors and their ship 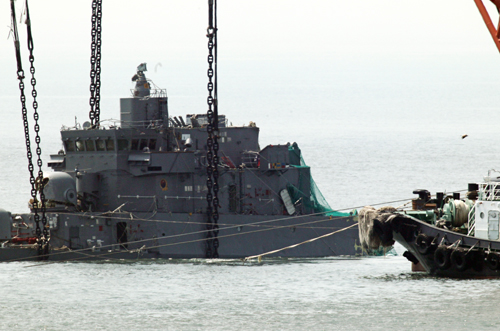 The bow of the Cheonan breaks the sea’s surface yesterday, 28 days after the corvette sank in an unexplained explosion. Salvage teams repositioned the bow, which had lain on its side on the ocean floor, and will hoist it today. [YONHAP]

In a symbolic move to honor the fallen soldiers, the government plans to rebuild the Navy’s sunken Cheonan as a warship with the most advanced weapons systems, the Prime Minister’s Office said yesterday.

Prime Minister Chun Un-chan hosted a meeting with security ministers yesterday to discuss the disaster and the plan to rebuild the corvette, said Kim Chang-young, a spokesman for Chung.

“The project is at the brainstorming stage, but there were opinions that we should rebuild the Cheonan, and Defense Minister Kim Tae-young also briefed the prime minister about the plan,” said Kim. He said among the ideas being discussed is building a new Cheonan.

The ministers also decided to provide special benefits to the families of the 46 sailors killed or still missing from the ship, by recognizing them as persons of national merit. Employment, education, medical and housing benefits will be provided to them.

Special compensation will also be provided to families of the fishermen who died on the Kumyang 98, a trawler which sank during an operation to rescue the warship’s sailors.

As authorities continued operations to salvage the sunken bow of the Cheonan, the body of another sailor was retrieved on Thursday evening, the military said.

The sailor was identified as Petty Officer First Class Park Bo-ram, and the discovery brought the confirmed death toll to 39. Seven sailors were still unaccounted for as of yesterday afternoon.

According to the military, Park’s body was found inside the chimney of the Cheonan in waters near the site where the ship sank.

Military and civilian workers continued their efforts to salvage the bow yesterday.

Major progress was made in the morning, as the teams successfully repositioned the front section of the ship, which had lain on its side on the ocean floor.

A huge crane linked four chains to reposition the bow underwater. Teams will attempt to hoist it today.

The military said the front half of the Cheonan, including the water inside, is estimated to weigh more than 1,000 tons. The military will pump the water out to lighten it during the salvage operation today.

After the bow is placed on a barge, investigators will go inside to search for the seven missing sailors. The stern of the Cheonan was salvaged on April 15.