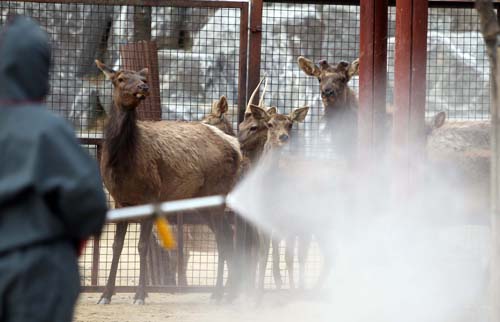 Workers at a zoo in Daejeon sanitize animals’ cages yesterday as a precaution against foot-and-mouth, after the disease was reported inland in Chungju, North Chungcheong. [YONHAP]

As fears of a nationwide outbreak of foot-and-mouth loom, zoos around the country are facing an emergency during what is supposed to be their peak season. As a precaution, the zoos are taking extra safety measures and canceling events that let visitors touch the animals.

Although foot-and-mouth disease does not affect humans, the virus can travel from animal to human and then to another animal.

Seoul Grand Park in Gwacheon, Gyeonggi, has canceled all petting events since April 10, around the time when warnings against a new outbreak of foot-and-mouth surfaced. All cages which contain hoofed animals, including deer, giraffes and goats, have been roped off so visitors can’t get near the animals. The park currently holds around 60 types of hoofed animals, totaling around 570.

In addition, the park has increased medical checkups of the animals from four times a week to two to three times a day. Special disinfectant carpets have been laid down at the zoo entrance and the cages, and security officials sanitize all cars that come to the zoo.

“When hit with foot-and-mouth disease, it is nearly impossible to salvage the animals so the loss will be tremendous if they are infected,” said Mo Ui-won, head of the zoo inside Seoul Grand Park. “Prevention is the surest countermeasure.”

At the Seoul Children’s Grand Park in Gwangjin District, visitors are restricted from going within 10 meters of the zoo’s 34 hoofed animals. The park has also canceled all petting events since April 10, and placed ropes around the cages of hoofed animals.

“Ordinarily, hoofed animals are peaceful herbivores, so we have lots of touching events. But now we’re strictly restricting these events and are disinfecting them at least two to three times a day,” said Lee Jae-yong, the head of the zoo at the children’s park.

Cheongju Zoo, near where foot-and-mouth broke out in Chungju, North Chungcheong, has restricted visitors from coming near 43 types of animals, including the guanaco camelids, and has increased medical checkups from once to twice a week. Everland in Yongin, Gyeonggi, hasn’t canceled its giraffe feeding event, but the park said that if the disease is found within 50 kilometers of the park, it will stop the public feedings.