Fans in a flurry over Bluewings’ losing streak

Fans in a flurry over Bluewings’ losing streak 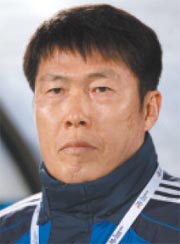 The Suwon Bluewings are off to the worst start in their franchise’s history and manager Cha Bum-kun is ready to take full responsibility.

“I am embarrassed and apologize to the fans,” Cha said after a 1-2 loss at home Saturday against Gangwon FC.

“I’m responsible for failing to assemble the right group of players for the team. A losing record is the sole responsibility of the manager.

“I’m ready to step down if the team seeks responsibility for our recent shortcomings.”

There have been a lot of them. Saturday’s loss was the Bluewings’ fifth in a row - the longest losing streak in the team’s 14-year history. Several Suwon supporters were seen holding up signs and banners calling for Cha’s resignation during the game.

It’s indisputable that Cha’s offseason signings have been disappointing so far this year. Forwards Jose Mota and Reinaldo haven’t made much of an impact, with only two goals from Mota and none at all yet from Reinaldo.

His trades haven’t fared much better. Suwon swapped Bae Ki-jong and Park Hyun-beom for defender Kang Min-soo, but Kang hasn’t managed to stabilize the defense, which has allowed a dismal 18 goals in eight games. Suwon is tied with Gangwon for most goals allowed in the league.

Then there are the midfielders with national team and English Premier League experience. Cho Won-hee and Kim Do-heon are talented players, but Cho’s been a shade of his former self and Kim is rehabilitating from a knee injury in Germany.

Despite Cha’s comments in the post-match interview, Suwon officials say the manager has never discussed resignation with them. And the front office has made it clear that it does not wish to replace him in midseason.

Considering that Cha took over the team in 2004 and re-signed a three-year deal with the club last year, it is highly unlikely that he’ll quit as the manager of the team.

“We understand Cha’s comments as a motivational tool to urge his players,” team director Ahn Ki-hyun was quoted as telling Yonhap.

Suwon has four league titles to its name with the most recent coming in the 2008 season. But after the title-winning season two years ago, Suwon hasn’t managed to find its way back. The squad is currently sitting in second-to-last place in the 15-team league, with a record of two wins and six losses.