Expats have place at the polls too

Expats have place at the polls too 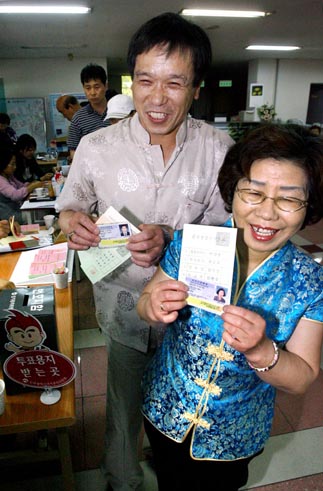 A Chinese couple residing in Incheon’s Chinatown participates in local elections held on May 31, 2006, when non-citizens were allowed to exercise their right to vote for the first time in Korea. [JoongAng Ilbo]

Voting is a right that many of us may take for granted in our own countries but seems unattainable in other countries. In fact, nearly 60 countries in the world afford at least some form of voting rights to non-citizens, with various limitations.

In August 2005, South Korea made history when it passed the “Public Official Election Act,” a suffrage law that allowed foreign residents to vote in elections alongside Korean citizens. In fact, South Korea is still currently the only Asian country which gives voting rights to non-citizens.

Incidentally, some politicians in Japan are currently crusading to offer voting rights to foreign residents there. The largest foreign community to be affected by this law would be overseas Koreans - the older generations who have resided in Japan since the Japanese occupation of Korea and the newer generations who were born in and have lived their entire lives in the country, but still have not been afforded citizenship or its accompanying rights, such as voting.

Similar to most other countries with suffrage laws for foreign residents, voting rights for expats in South Korea extend only to local elections - for national elections, voters must hold Korean citizenship.

“I encourage them to vote and have a voice in local affairs and the way that local government is run,” Timblick said. “I think it’s a privilege and an opportunity to take part and have a voice in the democratic process. It’s actually very much in line with the work that we are doing at the Seoul Global Center - which is to encourage the foreign resident community to get involved in mainstream [Korean] society.”

In order to be eligible to vote in local elections, international residents must have held an F-5 visa (permanent resident visa) for at least three years, be over 19 years of age, and be registered in their local voting jurisdictions.

In May 2006, the first election in which non-citizens exercised their right to vote was held and according to the National Election Commission, 6,726 international residents were eligible to vote. The vast majority of them, over 90 percent, were overseas Chinese residents of Taiwanese background, while the remaining voters were of Japanese, American, Chinese, German, Irish and Malaysian descent.

In this year’s June 2 election, the second to be held since the 2005 suffrage law was enacted, 11,683 foreign voters will be eligible to vote.

Timblick, who is eligible to vote for the first time in this year’s election, said that he is looking forward to casting his ballot.

“I’ve always felt that wherever you are, you should be taking part, so I’m quite excited about the prospect of voting this time,” he said. “As a foreigner, sometimes you feel you should stand apart from Korean politics and be impartial, but I do follow local issues and I feel like, why shouldn’t I have a say in the process of choosing those who make decisions?”

According to the NEC, this year’s eligible voters will participate in the vote for a total of eight elected officials, including six public officials and two public education officials.

The two public education offices are: superintendent of education and members of the Education Committee.

Although many countries may have laws that give voting rights to foreign voters, many of those laws are actually quite ambiguous and confusing and the elections themselves can be quite inaccessible, even to those who may be eligible to vote.

Korea, however, has taken some measures to increase the accessibility of elections to eligible voters.

To begin, the heads of election districts create lists of eligible voters for each district, city and region. For eligible foreign voters, this list will be based on the address on the Foreigner Registry. Therefore, it’s important to make sure that you have registered your address correctly in your local government (gu or dong) office to ensure that you are registered to vote in the correct district. This voters’ list will then be published online for voters to check.

If you feel that you are eligible to vote but have not been listed on the online voters list, contact your district, city or county office and show proof of eligibility to be added to the list.

Before the election, voters will receive voting guides in the mail by May 28, which will outline the voting process in English, Chinese, and Japanese.

The NEC has also launched an English newsletter to provide up-to-date news and information about all things election-related, which can be found at http://www.biznetkorea.co.kr/nec_newsletter/nec_201004/nec_201004.html.

Finally, the NEC also plans to host a Web site in order to create awareness and provide information. The Web site will be launched at the end of April, but until then the current Web site for the NEC is http://www.nec.go.kr/nec_2009/english/ (English) or http://epol.nec.go.kr/ (Korean only).

In the last election, the NEC conducted a variety of voting demonstrations in areas with high concentrations of eligible foreign voters in order to ensure that eligible voters understood the procedures for participating in the upcoming election. The schedule of demonstrations (in Korean or otherwise) for this year’s election has still not been announced, so it’s best to check with your local district office for more information, closer to the election on June 2.

In order for voters to become informed about the candidates for local office, the NEC will also mail official campaign booklets to voters. These booklets will give overviews of candidates within your district - including their job, academic background, career, financial records, military service records, criminal records, tax payment and default records for the past five years.

Unfortunately, due to the sheer number of candidates in this year’s local election - 15,500 - this information is only available in Korean. For information regarding candidates online, visit http://info.nec.go.kr/main/main_load.xhtml (Korean only).

When asked how much influence foreign voters might actually have on the election, Deputy Director of the International Cooperation Division at NEC Lee Eun-hye was realistic.

“I think the influence of foreign votes depends on the proportion of the foreign electorate in the district,” Lee said. “In [terms of] the [city/provincial] election, they might have [little influence] because Incheon, in which the ratio of foreign electorates and electorates is highest, has only 0.07 percent foreign voters. In terms of [district/city/county] elections, Jung-gu, Incheon, has the highest proportion [at] 0.83 percent.”

Even so, Deputy Director Lee also emphasized the importance of voting for those foreigners who are eligible.

“I believe that enfranchising eligible foreigners in local elections has significance in terms of grassroots democracy. The public officials elected through the local elections will decide the affairs of the local community,” she said.

While the percentage of foreign voters is still relatively small, the growing number - which has nearly doubled since the election four years ago - points to an increasing number of long-term international residents.