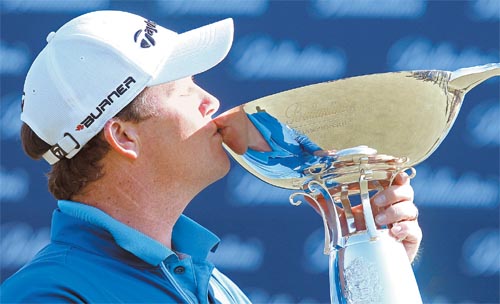 Marcus Fraser celebrates his win at the Ballantine’s Championship by kissing the trophy yesterday at Pinx Golf Club on Jeju Island. The Australian golfer ended his final round with a three-under-par 69, finishing 12-under-par overall. [YONHAP]


Marcus Fraser of Australia shot 12-under-par overall to hold off final-round competition and notch the second European Tour win of his career at the 2010 Ballantine’s Championship at Pinx Golf Club on Jeju Island, which began Thursday and ended yesterday.

The 31-year-old Australian, who held a one-stroke lead after the first two rounds, finished the final round with a three-under-par 69 to win his first European Tour event since 2003. Fraser has won four events in his eight-year professional career, with his biggest achievement coming at the European Tour 2003 BMW Russian Open.

Gareth Maybin of Northern Ireland and Brett Rumford of Australia finished tied for second at eight-under-par. Noh Seung-yul, who finished tied for fourth at seven-under-par with Oliver Fisher of England, was the top Korean golfer.

“In order to compete on the European Tour event, I prepared a lot for the windy conditions of Jeju Island,” Noh said after the tourney. “I had new clubs fitted and purposely practiced in the wind. As a result, I believe I have improved my ability to control my shots in the wind.”

With an impressive finish at the Ballantine’s Championship, the 18-year-old got a piece of the 2.2 million euro ($2.95 million) total cash prize and moved to the top of the Asian Tour money earner’s list. If Noh maintains that pace he can become the youngest golfer in the history of the Asian Tour to become the top earner.

Some of the big names made a disappointing showing. South Africa’s Ernie Els tied for ninth, Korean-American Anthony Kim tied for 16th overall and Korean Yang Yong-eun tied for 114th, a six-over-par letdown for the hometown hero who was coming off a win at the 2010 Volvo China Open earlier this month.

The island is known for its heavy winds but this year’s event saw unexpected weather, as heavy fog halted competition on opening day and heavy wind gave players fits on second. The tourney was reduced to three rounds from the scheduled four to accommodate for lost time on the first round.