Man United rises to the top with 3-1win

Man United rises to the top with 3-1win 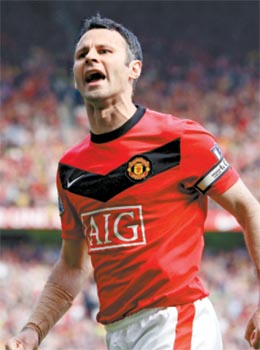 Manchester United’s Ryan Giggs reacts after scoring a goal from the penalty spot against Tottenham on April 24. [AP/YONHAP]

While Chelsea stood in line to return to the top if they managed a home win over Stoke City yesterday, third-placed Arsenal’s championship hopes mathematically ended with a 0-0 stalemate against Manchester City, who are fifth, at the Emirates Stadium.

Captain Ryan Giggs slotted home two penalties at Old Trafford to pile the pressure on Chelsea, who have three games left, but United may have to play their last two matches without striker Wayne Rooney, who was sidelined with a groin injury.

United, who close out the season with games at Sunderland and home to Stoke City, are chasing an unprecedented fourth successive championship.

They have 79 points while Chelsea, who must also play Liverpool and Wigan Athletic, are on 77 with Arsenal cut adrift on 72.

“I think we played well ... the most important thing was we kept our nerve,” said United manager Alex Ferguson, smiling after what was on paper their toughest remaining fixture against fourth-placed Spurs.

“There were no signs of nerves whatsoever throughout the game, it was great to see that at this vital time of the season,” he added.

“We beat the in-form team of the week today; that says a lot for us.”

Ferguson also told Sky Sports television that Rooney was likely to be out for two to three weeks.

Asked whether the England striker would play for United again this season, the Scot added: “We’ll give him every chance and Wayne will be desperate to play himself but we’ll just have to wait and see.”

After a goalless first half on a sunlit afternoon in Manchester, United brought the game to life with Giggs’s first penalty in the 58th minute.

Patrice Evra, who was sick on the pitch at one stage in the heat, was brought down by a rash tackle from Cameroon defender Benoit Assou-Ekotto.

Giggs stepped up and, with all the composure of his 36 years, slotted home from the spot.

Spurs, who beat Chelsea and Arsenal last week, leveled with a 70th-minute header from Ledley King that threatened to derail United’s hopes of retaining the title.

Nani, though, restored the home team’s lead in the 81st minute after being set up by substitute Federico Macheda.

The Portuguese winger was also brought down by Wilson Palacios for the 86th-minute penalty converted by Giggs.

Tottenham, who have not won in the league at Old Trafford for 21 years, remain a point clear of Manchester City in the battle for the final Champions League qualifying berth.

City and Spurs both have three matches left and must still play each other, with the Eastlands club facing a goalkeeping crisis after Shay Given was taken off on a stretcher grimacing in pain after dislocating his shoulder.

The Ireland international was replaced by Gunnar Nielsen for the last 23 minutes, the reserve keeper making his debut as the first player from the Faroe Islands to appear in the Premier League.

At the other end of the table, Hull City were resigned to relegation after a bad-tempered 1-0 home defeat by Sunderland while West Ham United beat Wigan 3-2 to move to the brink of safety.

West Ham are 17th with 34 points while 18th-placed Hull remain on 28 with two matches left and a vastly inferior goal difference that leaves their survival hanging by the slimmest of mathematical margins.

Burnley, on 27 points with a game in hand, will be relegated if they lose at home to Liverpool on Sunday.

“We’ve been in the bottom three all season really so at the end of the day you’ve just got to hold your hands up and say we weren’t good enough,” said Hull chairman Adam Pearson.