Will the iPad change the world?

Will the iPad change the world? 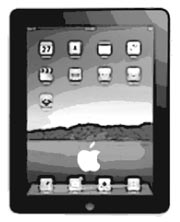 Korean early adopters are buzzing about Apple’s latest product: the iPad. Even though the tablet is not on sale yet in Korea, some anxious Koreans have already bought it online or abroad. Online chatrooms are filled with their boasts about the new product. Some are even calling it the beginning of a revolution.

Sales so far have been impressive. On April 3 alone, the first day the iPad was sold in the United States, 300,000 iPads were sold. Now, the sales volume has already exceeded 800,000. The iPad was scheduled to go on sale in Korea at the end of this month, but the launch date was delayed here because production can’t meet the growing demand in the United States.

American journalist and author Jeff Jarvis predicts that the popularity of the iPhone and iPad will ultimately undermine the production of content and set the structure of Internet users back to the stage where there were a small number of producers and many consumers. The idea is that the direction that the Internet has been going in its “Web 2.0” phase - where individuals both produce and consume content on the Internet - will reverse and individuals once again will be slaves to only a handful of producers’ content. Both the iPad and iPhone have been criticized for their closed platforms that restrict which programs they can run.

But while tinkerers may be disappointed in the iPad, traditional media is celebrating what looks like impending change. Newspapers and book publishers have been competing neck and neck to be included on the list of content available on the iPad. Broadcasters, record labels and movie producers are also trying to get in on the game.

Of course, there are many who do not recognize the signs of change yet.

“Han Feizi,” a book written by a Chinese philosopher during the Warring States Period (475-221 B.C.), tells the story of Kizi, a wise man who was an uncle of King Zhou of the Shang Dynasty. When the king began using chopsticks made of ivory, Kizi quit his high government post and went into hiding. He said: “With ivory chopsticks, one cannot eat food served in an ordinary bowl. So, the king will order bowls and plates be made with gold, silver and porcelain. But such lavish dishes will make it difficult to serve ordinary food in them. If people adjust the level of things like this, the tendency toward extravagance will prevail and the country will collapse because the king will lose popularity.”

The courtiers sneered at Kizi’s logic, but they were all killed not long afterward when King Wu of the Zhou Dynasty staged a coup.

Like Kizi, we must be attuned to the first signs of change, or else we’ll find ourselves struggling to adapt in the new era.