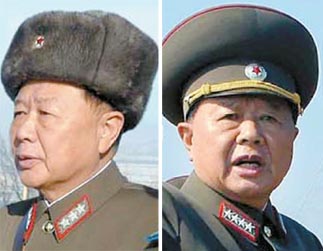 Kim Myong-guk with three-stars on Jan. 17 (left) and with four-stars on April 25 (right) on his collar. [YONHAP]

A key general in the North Korean Army has been returned to four-star rank after a demotion earlier this year, and South Korean government and intelligence officials are scrambling to find out why.

In TV footage and photos, General Kim was seen standing close to Kim Jong-il and pointing to operations maps.

In January, Kim Myong-guk appeared in state media with only three stars on his collar. Analysts here speculated then that Kim might have been held accountable for North Korea’s loss to South Korea in a naval skirmish near the South’s Daecheong Island off the west coast in November.

Last Wednesday, North Korea carried out its second largest promotion of generals under Kim Jong-il’s leadership. It was a day before the birthday of the late leader Kim Il Sung, an occasion dubbed “the Day of the Sun.”

The move was seen as an attempt to boost the morale of the armed forces but Kim Myong-guk wasn’t among the promoted generals. Among other influential figures, Ri Byong-chol, the chief Air Force commander, was promoted to four-star general, as was the chief naval commander Jong Myongdo.

“It is extremely rare for a general who wasn’t included in the major promotion to move up a rank in a separate move,” said a South Korean government official. “We’re trying to determine whether Kim’s promotion was related to the Cheonan sinking.” Although the South Korean government hasn’t officially accused North Korea of the attack, a North Korean torpedo attack has been suspected as the cause of the external blast that split the warship in half.

Kim Myong-guk first became a general in 1994 and was named operational chief later that year. He went on to lead the Fifth Army Corps starting in 1997 and the 108th Mechanized Corps from 1998 before returning to the operations bureau in 2007. Officials also took note of the promotion to four-star general of two officers handling security of North Korea.

U Dong-chuk, a senior deputy chief of the State Security Department, and Yun Jong-lin, chief of the Guard Command, each moved up a rank. U had been promoted to lieutenant general only a year earlier.

As the North Korean leadership gives more clout to its already powerful generals, its chief of staff warned Saturday the North would deploy nuclear weapons if invaded by South Korea and the United States.

The official Korean Central News Agency reported that Ri Yong-ho, the chief of the North Korean Army’s general staff, said the North Korean armed forces “are fully ready to frustrate any provocations of the aggressors at a single blow.”

“[The North Korean military] will mobilize all means including the nuclear deterrent . . . should the U.S. imperialists and the South Korean puppet warmongers dare intrude into the inviolable sky, land and seas of the DPRK even 0.001 millimeter,” Ri was quoted as saying. Ri also spoke of “a grave situation” on the Korean Peninsula brought on by the South and the United States, both of whom wanted to launch a new war.