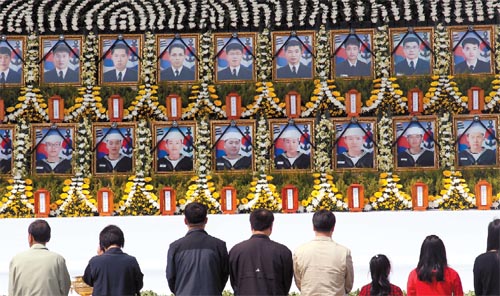 Mourners pay homage to the fallen sailors of the Navy ship Cheonan yesterday at a specially-established mourning altar in front of Seoul City Hall. More altars will be set up at military units and public place across the nation. [YONHAP]


The South Korean Navy announced yesterday that the dead Cheonan sailors will be honored in a full Navy military funeral this Thursday, April 29. The service will be observed at the Second Fleet Command in Pyeongtaek, Gyeonggi.

In a separate announcement yesterday, Prime Minister Chung Un-chan said that the day of the funeral service has been designated a national day of mourning, as are the four days leading up to the service.

“The government will not let these heroes’ patriotism go to waste,” said Chung, fighting back tears. “And we ask you to remember them as we all say our final farewell to them.”

The Navy also said mourning altars will be set up at military units and major public places across the nation. Ninety military units, including 10 Navy bases and 58 Army divisions, will host altars. There will be 16 public altars, including one in front of the Seoul City Hall and also in hometowns of the deceased sailors. The altars will remain in place until noon Thursday, the Navy said.

According to the Navy’s press release, the sailors will each be posthumously promoted by a rank. The Navy explained the move was to recognize the sailors’ “determination to protect the South Korean seas and their sacrifice for the country.” Of the 46 dead and missing sailors, 30 were noncommissioned officers and 16 were drafted soldiers.

The government announced last week the dead soldiers will all be considered killed in action.

Almost a month after it went down, the bow of the Cheonan was salvaged Saturday and brought to the Second Fleet Command for closer inspection. And South Korea’s military and civilian investigators tentatively concluded yesterday that the sinking of the naval warship Cheonan was caused by a powerful external blast at close range, and not a direct hit to the ship.

In announcing the findings yesterday, scientist Yoon Duk-yong, the civilian head of the team, ruled out causes other than an external shock.

“Our inspection of the bow showed no damage to the munitions storage and the fuel tank, and thus we don’t think an internal explosion was the cause,” Yoon said. “Given the severity of the damage, we determined metal fatigue wouldn’t have been possible and instead an underwater explosion is highly likely. Without any soot on the ship’s body or any signs of melting under the heat, we’ve concluded that a non-contact explosion was the possible cause.

“We should be able to determine the exact location and force of the blast through closer inspections and simulation,” Yoon added.

The 1,200-ton naval corvette was split in half and sank on March 26 near the western sea border with North Korea. The rear part of the ship was salvaged on April 15 while the bow was recovered on Saturday.

After studying the stern last week, investigators also tentatively concluded that an external blast appeared to have been the cause. They based their findings on severe damage to the side of the stern and the flooring of the Cheonan, which is bent upward in an inverted-V shape.

Prior to that, metal fatigue on the Cheonan or a collision with a reef were considered possible causes.

By narrowing the causes to an external blast, investigators bolstered the theory that a North Korean torpedo was responsible. Pyongyang has denied that and accused the South of “deliberately linking the sinking of its warship” to North Korea and said Seoul “went to the length of crying out for the total severance of the North-South relations.”

In an attempt to ensure the transparency of the probe, South Korea has enlisted the help of military and civilian experts from the United States, Britain, Australia and Sweden.

Park Jung-yi, Army lieutenant general serving as the military chief of the investigation team, said it was premature to point to a torpedo as the cause. “An external blast could be caused by a torpedo or sea mines,” he said. “But we need closer analysis and review before we can determine just what led to the external shock.”

Their families have agreed to classify them as dead.