Classical comes to the park

Classical comes to the park 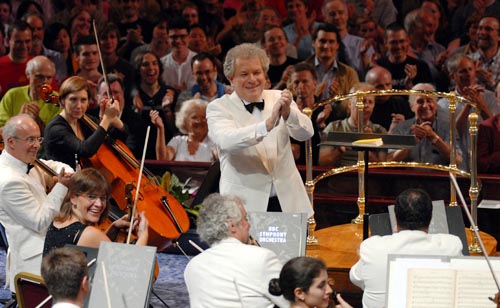 The BBC Symphony Orchestra, conducted by Jiri Belohlavek, brings a version of its popular BBC Proms in the Park outdoor concert series to Olympic Park in Seoul on May 15. Provided by the organizer

The opportunity to gather with family and friends to enjoy a picnic on the lawn while watching a world-class orchestra seems like something that would be possible only in New York or London. But the BBC Symphony Orchestra is set to offer this kind of event right here in Seoul at Olympic Park on May 15.

The event will be modeled after the format of the BBC Proms in the Park, a segment of the eight-week BBC Proms festival, one of the world’s major music festivals, said Hyundai Capital, the event sponsor.

It will be held at 88 Lawn Field, a venue at the 438,000-acre park whose large outdoor stage has featured a slew of pop music events such as the annual Grand Mint Festival.

But this is the first time the venue will hold a classical musical event. The dominant view here is that classical music should be enjoyed in formal settings. The event organizers hope to change that.

A handful of classical music events have been held at Sangam World Cup Stadium in western Seoul and Seoul Children’s Grand Park on the opposite side of the capital, but both venues are equipped with permanent outdoor seating. At Olympic Park, attendees will sit on the lawn, picnic-style.

“We intend to introduce a brand-new concert format that will enable the audience to enjoy both a picnic and classical performance at the same time,” said a spokesman with Hyundai Capital. He said alcoholic beverages will be permitted but that excessive drinking is discouraged.

Credia, the event organizer, said it will install temporary seats on the lawn and reserve space in the back for those who want to spread out a mat and enjoy a picnic. The space does not have green grass but the surrounding area has plenty of it.

To make it possible for a wider demographic to attend the event, Hyundai Capital has slashed ticket prices. Tickets range from 10,000 won ($9) to 80,000 won per person. A ticket package for a family of four is available at a cost of 90,000 won and includes the use of one table and four chairs.

Under the leadership of its chief conductor, Jiri Belohlavek, the orchestra will play the overture and three dances from the comic opera, “The Bartered Bride,” by Czech composer Bedrich Smetana, Grieg’s Piano Concerto in A minor Op. 16 and Dvorak’s Symphony No. 9 in E minor “From the New World.”

The Grieg piano concerto will be played by Ji Yong, a 19-year-old Korean piano prodigy.

For those who would rather see the London-based orchestra in a more traditional setting, Seoul Arts Center will host a concert the next day. There, Korea’s beloved violinist Kim Ji-yeon will play Sibelius’ Violin Concerto in D minor. Ticket prices for the SAC concert range from 50,000 won to 200,000 won. For more, visit www.clubbalcony.com or call 1577-5266.