Free trade is the key for Canada

Free trade is the key for Canada

Praising President Lee Myung-bak’s commitment to fight protectionism, Canada’s top envoy urged Korea to lift its ban on Canadian beef imports, stressing that the resumption of trade will signal Seoul’s commitment to open markets as it prepares to host the G-20 Summit in November.

In a recent interview with the JoongAng Daily, Canadian Ambassador Ted Lipman emphasized the safety of Canadian beef and the country’s control system, and expressed his displeasure that the matter of beef imports has become a political and emotional issue, rather than a debate about science and consumer freedoms, in Korea.

“Quite frankly, the effectiveness and transparency of Canada’s control system is precisely the reason why Koreans can have confidence in Canadian beef,” Lipman said. “We have found BSE [Bovine Spongiform Encephalopathy] in our herds because we look for it. And we remove any danger of BSE affecting the food chain.”

Lipman stressed that the safety of Canadian beef has been recognized by the World Organization for Animal Health as well as by more than 55 countries that import over $1.26 billion worth of the product from Canada. 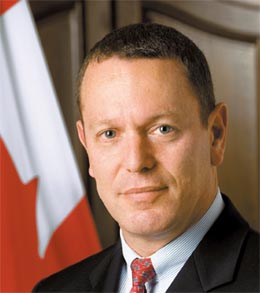 Calling Korea’s ban, imposed in 2003, “discriminatory,” the Canadian envoy said his government has taken the issue to the World Trade Organization, while continuing talks with the Korean government.

“I think Korea is putting itself in a very vulnerable position as a country that relies on export markets being opened if they are going to make decisions on imports that are political,” he said, urging Seoul to lift the ban as soon as possible. “Decisions should be transparent, fair, based on science and international obligations.”

Lipman also said that once the market is open, individual consumers will have a choice about whether to buy or not.

“We believe in the freedom of choice,” he said. “There is a political choice, and that’s why we fought in the Korean War, so that the people can have a political choice. And there is an economic choice .?.?. Korean consumers deserve to have it. Ultimately, it is a matter for individuals to decide.”

The Canadian ambassador also said that the resumption of beef imports will coincide with Korea’s efforts to conclude a free trade deal with Canada. He said the ambitious deal will deliver significant commercial benefits to both countries and send a strong pro-trade, anti-protectionist message to their key trading partners.

Lipman said the two countries have no deadline for concluding the deal, making it clear that negotiators should not rush things.

“What Canada is looking for is a high-quality FTA that will allow Canada’s businesses to compete in Korea on a level playing field,” he said.

“Korea has a long history of having a protective market. Things don’t change overnight and we do still find protectionist forces in Korea,” he said.

Still, he complimented President Lee for his anti-protectionist initiatives.

“We applaud Lee’s focus on anti-protectionism in the G-20 and on the free market,” he said. “The current administration is a strong believer in free trade and open markets and recognizes that Korea needs to have FTAs and open markets to sustain its economy in the future.”

Saying that it may take time for Koreans to understand the advantages of free trade and why protectionism is not in the country’s best interest in the long term, Lipman added, “Lee is committed to the objectives, we believe, and that is reflected in his leadership role in the G-20, when he made anti-protectionism a key theme.”

Lipman said Canada is fortunate to be able to implement an exit strategy, as the country is already on the road to recovery. “Canada has a very sound regulatory system, coupled with high capital standards and sensible lending rules,” he said. “[That can] serve as a model to others.”

He also noted that the country’s Economic Action Plan, a comprehensive plan to stimulate the economy, restore confidence and invest in growth engines, has already contributed to the creation of more than 135,000 jobs since July 2009.

Lipman said Canada’s goal this year is to return to a balanced budget. He said the government has already announced that Canada will follow through with its exit strategy.

“As a result, the federal deficit will be cult by almost half in two years’ time, by two-thirds in three years’ time and eliminated entirely shortly after that,” he said.

The Canadian ambassador said Korea and Canada have been in close contact regarding their hosting of the two G-20 summits this year. Toronto hosts the summit in June and Seoul will host the next round in November.

“Sherpas and financial deputies are in close contact not just for the events in Toronto and Seoul, but also on how we maintain the momentum that will carry forward in a consistent way the objectives that were already established [at past summits],” he said. The objectives include a framework for sustainable and balanced growth, strengthening the financial sector and reforming international financial institutions.

Most agree that achieving those goals will require the combined efforts of the G-20 member countries and the international community, he said. Given the daunting tasks the world is facing, the key, he said, is focus.

“Focusing on the economy, focusing on finance, focusing on the objectives that I just mentioned,” he said. “Those are the areas in which Canada and Korea will have to maintain a very strong, I will use the word again, focus.”

Lipman said that the summit’s success rests not just with the host country but necessitates cooperation among all G-20 member nations. In other words, each country must demonstrate that it has made progress toward fulfilling past commitments, setting the stage for future discussions.

“I think we have to look at the bigger picture,” he said, likening the G-20 to the Olympic Games.

“The Olympics have winners and losers, but if the G-20 is successful, everybody is a winner,” he said.

“Will everyone [in the G-20] get a gold, silver or bronze medal? I think it may be a little early to tell. The Olympics is about competition, but the G-20 is about collaboration.

“We are on the same team. It’s like a relay race. Hopefully, this is a team that will show the world the way out of the current economic difficulties.”