Usher’s good and bad fight it out on new album

Usher’s good and bad fight it out on new album 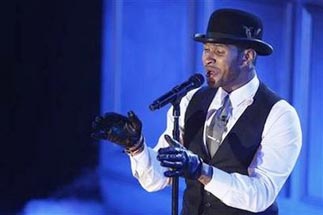 LONDON - The eligible bachelor is back in U.S. singer Usher’s new album “Raymond v. Raymond,” which he sees an expression of his struggle to balance life in the fast lane with his commitments as a family man and father.

Last year the 31-year-old R&B star, one of the world’s top-selling musicians, filed for divorce from the mother of his two young sons, and feelings of anger, guilt and relief filter through his latest record.

So too does a celebration of being single again, placing Raymond v. Raymond somewhere between his 2004 hit “Confessions” and the more subdued, though less successful follow-up “Here I Stand” that followed his 2007 marriage to Tameka Foster.

“Here I Stand was a very personal album, it was very honest, there wasn’t that much drama because I was in a happy place, I was married, I had children and [was] really coming of age,” Usher told Reuters in a telephone interview.

The five-time Grammy award winner had been due to give interviews in London this week, but the flight ban over Europe caused by volcanic ash prevented him from traveling.

“That same acceptance of coming of age is in this album, it’s just a different story,” he added. “I’m no longer married, and the reality of sustaining and balancing the celebrity that I am and the individual that I’ve grown to be is what Raymond v. Raymond is all about. If I had to put it short, I’d say Raymond v. Raymond is a little bit of Confessions and a little bit of Here I Stand.”

Usher said his decision to sing about personal issues was partly a comment on people living “vicariously through sensationalism” in the form of celebrity gossip. “That became kind of an underscore for this album, because it seemed like the main topic of the world - who’s cheating, who’s in a relationship, what’s happening, who’s doing what, who’s with who.”

Asked why people seemed so fascinated with the personal lives of the famous, he replied: “A lot of people are running from their hard truths.”

Raymond v. Raymond topped the U.S. album chart on its release and the single “OMG” reached No. 1 in Britain. Usher’s last three albums have hit the top spot in the U.S. market, although sales figures show that Confessions was his most successful record, selling 10 million copies there. Raymond v. Raymond sold 329,000 copies in the U.S. in its first week, versus around 440,000 for Here I Stand, partly reflecting a shrinking market for album sales worldwide.