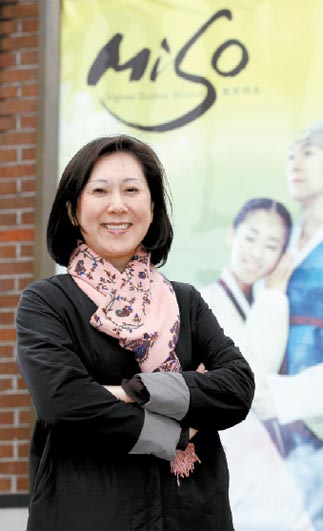 Choi Jeong-im, 55, former chief dancer at the National Dance Company of Korea, was inaugurated as the director of the Chongdong Theater in central Seoul, now being used for the traditional show “Miso.” By Choi Jeong-dong

Thousands of tourists have already come to enjoy Korea’s traditional instruments, percussion, song and dance - all in one place, in one show.

The place is Chongdong Theater in downtown Seoul, and the show is called “Miso,” Korean for “Smile.” With an old-fashioned samulnori percussion quartet and performers in hanbok traditional garments, it’s a long-running hit among foreigners visiting Korea.

Miso has actually been on stage for 14 years, putting smiles on at least 550,000 faces - but it didn’t have a permanent home until this year. But thanks to its consistent popularity, it’s now settled on a home, the Chongdong behind Deoksu Palace, where two performances a day take place, adding up to a total of 540 per year.

About 90 percent of its viewers are overseas tourists, which is why tour buses sitting bumper to bumper are a common sight in the quiet alleys of Chong-dong every evening.

The first performance in its new permanent venue was held on March 31, the same day Choi Jeong-im was inaugurated as the show’s director. Choi, 55, was a chief dancer in the National Dance Company of Korea, and since January last year she has worked as an artistic director at the Chongdong.

Q. Why is having a private theater for Miso so important?

A. Miso is a tourist product. That’s why we have to promote it to travel agencies abroad, but frequent changes of locations and times are a barrier to active marketing. By having a private theater, we now have more performances. Initially, we always had the 8:30 p.m. performance, but once a day wasn’t enough to meet demand so we have decided to hold another performance at 4 p.m.

Most of Miso’s viewers are foreigners. What makes it so different from other traditional performances?

We can no longer tilt toward the fine arts. We have to take tourists’ preferences into consideration. For example, foreigners love samulnori. That’s why Miso included Korean percussion instruments like a gong and [its smaller cousin the] kkwaenggwari in its performance even though the narrative has nothing to do with those instruments. When I first watched Miso after becoming the artistic director of the theater, I was so absentminded. I just thought, “What did I just watch?” In order to turn traditional performances into a masterpiece, it has to include artistic value. Adding this value into Miso was what we’ve been doing at the Chongdong Theater over the past year.

So how is it different?

Initially, the performance was in an omnibus style. But now it has a main story line. Last year, the story was about the changes in the four seasons, with a love story about a woman as its foundation. This year, it’s the story of “Chunhyangjeon,” a Korean folktale. For the tourists, it includes scenes like the induction of a district magistrate into his office, traditional birthday parties and wedding ceremonies. Many attractive scenes are now being performed with a story merged into them. This way, more viewers are being immersed in the performance.

Are there any programs for domestic audiences?

I’m planning to upgrade the “Art Scene at Noon,” a performance that has been going on during spring and autumn afternoons. The programs were mostly focused on musical concerts, but we are going to diversify them by adding dance and pansori [Korean narrative song]. Actually, we haven’t been doing any marketing toward domestic audiences, and that’s why not many Koreans know about Miso.

The Chongdong Theater is also planning to host wedding ceremonies during the 4 p.m. Miso performance for those couples who are in financial difficulties and can’t afford the event themselves. During the wedding scene, instead of using actors, there will be real couples having a traditional wedding ceremony.

What are your aspirations as a director?

In the facilities aspect, Chongdong Theater is lacking in so many fields. There is no room behind or beside the stage, so it’s difficult to reset the sets. And as the American Embassy is right next to the theater, it’s nearly impossible to extend the building or even renovate. It’s a pity that we can’t adopt the state-of-the-art facilities or high-tech systems that are advancing every second. So I’m planning to build an affiliated theater outside of Seoul and hold performances using up-to-date facilities and technologies.

For the moment, we’ll sign a memorandum of understanding (MOU) with the Gyeongju Arts Center that will open in June and hold Miso performances there. And I’ll actively bring in top-notch actors and actresses to lure more Asian fans. Some Japanese visitors have been coming to watch Miso at least 10 times to see an actor they like. It’s like high-class Hallyu [the Korean wave] spreading through Miso.