A final recognition for fallen soldiers

A final recognition for fallen soldiers 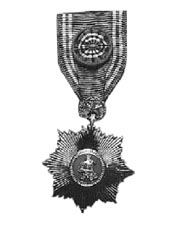 British medieval monarch Edward III had been dancing with the Countess of Salisbury at a ball when her garter suddenly slipped from her leg. As the courtiers gasped, the king gracefully picked up the undergarment and tied the garter around his own knee, saying “Shame upon him who thinks evil upon it.” This chivalrous gesture led to the creation of the Order of the Garter in 1348, the pinnacle of the knighthood honors system in the United Kingdom.

Every culture has had its heroes and every great leader has found a way to recognize those who dedicate their lives to their country. One of the fi rst symbols of bravery in battle was the Maltese cross, which originated in the 11th-century Christian Crusades.

The cross remains as popular insignia for bravery and chivalry honors in Europe. The Royal and Military Order of Saint Louis, founded by France’s Louis XIV, decorated the highest degree of military merit with a Grand Cross.

The Prussian Kingdom bestowed Iron Crosses to war heroes in 1812 amid Prussia’s period of “blood and iron,” or struggle against the Napoleonic invasion.

Of course, there are different grades of merit. Countries differ slightly, but most states bestow the highest honors with an insignia worn around the neck, accompanied by badges on the collar and left side of the chest.

The fi rst grade badge hangs on a shoulder strap. The second grade badge is worn on the right breast, the third grade around the neck and the lower grade on the left breast.

The Korean government has an order system of 11 medal decorations. The highest merit is the Grand Order of Mugunghwa, bestowed upon the Cardinal Stephen Kim Sou-hwan at his funeral.

The order of merit is classifi ed in fi ve grades. The Civil Merit is named after fl owers, the highest being Mugunghwa, followed by Moran, Dongbaek, Mogryeon and Seogryu.

The Order of Military Merit takes its name after famous groups of warriors — Taegeuk, Eulgi, Chungmu, Hwarang and Inheon.

The government will decorate the sailors who lost their lives in the Cheonan, a naval corvette that was sunk from an explosive attack in the waters near the maritime border with North Korea, with the fourth-class Hwarang merit. The Hwarang were young warriors that played a large role in unifying the divided Silla Kingdom (57 B.C.-A.D. 935) We hope the merit recognition will be of a small comfort to the young souls and their families left behind.