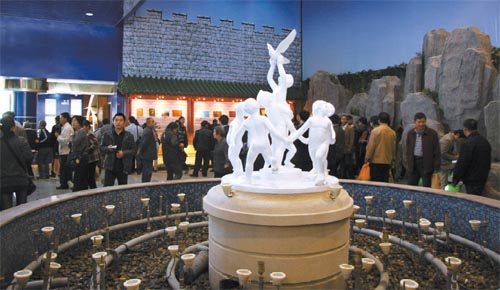 North Korea opened its pavilion to the public at the Shanghai World Expo on April 20. As North Korea was participating in a World Expo for the first time, many curious tourists drop by the hall, which is located 100 meters (328 feet) away from the South Korean pavilion. [YONHAP]


BEIJING - Kim Yong-nam, the nominal head of North Korea, will travel to China this week to attend the opening ceremony of the Shanghai World Expo and meet Chinese leaders, a source here said yesterday.

According to the source, Kim Yong-nam will represent North Korea at the Expo in place of Kim Jong-il. The source added that it would be “physically very difficult” for Kim Jong-il to travel to China this month, as had been speculated.

Kim Yong-nam is the head of the Presidium of the Supreme People’s Assembly, which is the highest organ of state power under the North Korean Constitution. Kim has represented North Korea on state visits and summits.

Kim Yong-nam is set to meet Chinese President Hu Jintao and other senior Chinese officials. China agreed to cover the costs for the construction of the North Korean pavilion at the Expo.

Kim is the first North Korean government official to visit China since the sinking of the South Korean naval warship Cheonan on March 26. Although South Korea has not officially named North Korea as the culprit, a North Korean torpedo attack has been suspected of causing the blast that split the vessel in two.

A second source in the Chinese capital said yesterday the North Korean military first denied the country’s link to the Cheonan sinking during a meeting in Beijing with their Chinese counterparts four days after the incident. The North’s official denial through its state media came on April 17.

According to the source, a North Korean major general, An Yong-ki, told Xu Caihou, a vice chairman of the Communist Party’s Central Military Commission, that the Cheonan sinking had nothing to do with North Korea.

Another Beijing source said, “China is waiting for the findings of the South Korean government’s probe, aided by foreign experts. China is still not completely sold on the North Korean denial.”

China waited about a month before officially commenting on the Cheonan sinking, calling it “a tragedy.”

South Korean President Lee Myung-bak is also scheduled to fly to Shanghai this Friday and hold a summit with Hu.

Lee last crossed paths with Kim Yong-nam during the opening ceremony of the 2008 Beijing Olympics, when the two men briefly shook hands.