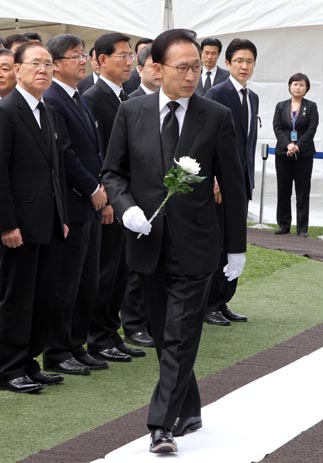 President Lee Myung-bak and his aides pay homage to the fallen sailors of the Navy ship Cheonan yesterday at the mourning altar set up in front of Seoul City Hall. [YONHAP]

As concerns mount about the military’s poor response to the Cheonan crisis, the Blue House has created a task force to improve the country’s security posture, sources at the presidential office said.

Led by Senior Political Affairs Secretary Park Heong-joon and Senior Foreign Affairs and National Security Secretary Kim Sung-hwan, the team held its first meeting over the weekend, they said. The team was created on President Lee Myung-bak’s order to cope with the aftermath of the Navy disaster.

“Not only the situation related to the Cheonan but also all issues related to national security, including the reform of the military, will be discussed by the task force,” a Blue House official said.

“Establishment of the new security regime will be the new national agenda,” another official said.

The president and more than 80 Blue House officials also visited the mourning altar located near Seoul City Hall yesterday morning to pay their respects. “That is an expression of the president’s determination to make national security the nation’s top priority,” another presidential aide said.

Lee laid a single white chrysanthemum before the portraits of the victims, and wrote in the guest book, “The Republic of Korea will never forget your noble sacrifice.”

“This tragedy should serve as an opportunity to move forward, not to step back,” a solemn-faced Lee said after he paid a silent tribute.

A large placard was also hung near the presidential compound to honor the 46 fallen sailors. The joint funeral for will take place on Thursday at a naval base in Pyeongtaek.

Since the Cheonan sank on March 26, Lee has stepped up efforts to overhaul the country’s security crisis management systems. “Lee’s keyword is devoting himself to his role as the commander in chief of the military,” presidential spokesman Lee Dong-kwan said.

As the Blue House tries to get a grip on the situation, the Board of Audit and Inspection announced its own probe into the military’s failed crisis response and reporting system.

The audit will focus on how news of the sinking was reported up the military chain of command, including why the military’s first report was issued almost 20 minutes after the news reached the president, and how the government and the military reacted to the crisis.

It will also examine why maritime police managed to rescue 58 sailors and the Navy none, when both had ships close to the site of the disaster.

“We will begin the audit shortly after the funerals of the dead sailors,” said a board official. “We have collected the necessary reports and data from the Ministry of National Defense and the Joint Chiefs of Staff and an analysis is ongoing.”

Since the Cheonan sank in the waters near the western inter-Korean border, the military has faced fierce criticism from the public and politicians. On April 16, Defense Minister Kim Tae-young apologized for the ministry and the military’s poor handling of the “unprecedented incident” and for losing the public’s trust, and asked the Board of Audit and Inspection to look into the military’s initial response to the disaster.

As authorities scramble to review the crisis response to the tragedy, the military’s senior commanders plan to sit down next month to discuss their shortcomings and ways to improve them. Defense Minister Kim will host the meeting.