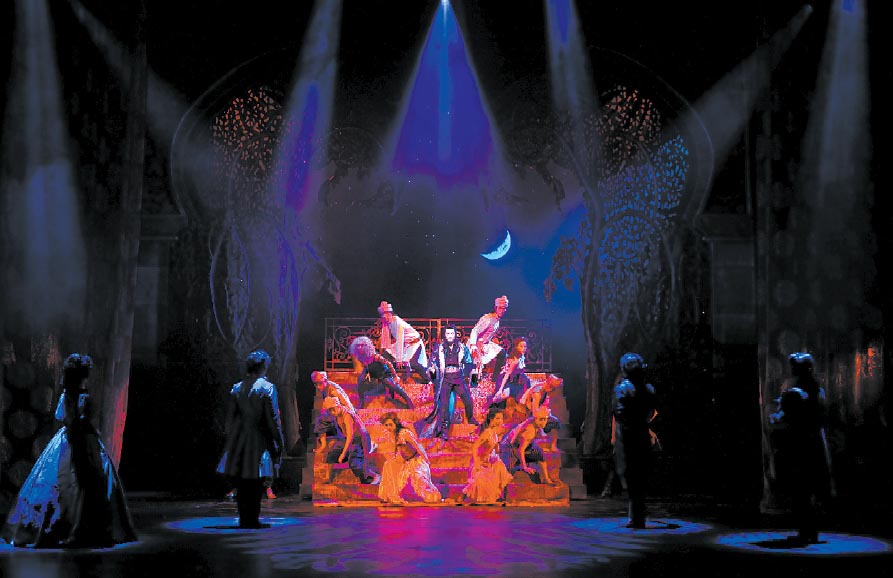 Shin Sung-rok, who plays the Count of Monte Cristo, sings a song of revenge for his unjust imprisonment. Provided by the organizer

It has everything you could ask for in a compelling story - love, conspiracy, betrayal, revenge, redemption.

Perhaps that’s why “The Count of Monte Cristo,” which was originally written by French novelist Alexandre Dumas in 1845, continues to resonate through pop culture. The 1994 movie “The Shawshank Redemption” contains echoes of the novel’s theme of redemption, while Korean director Park Chan-wook’s 2003 film “Oldboy” tells the story of a man who is imprisoned for 15 years without knowing why and becomes entangled in another man’s quest for vengence.

The story has also inspired a number of theatrical productions, including the musical that just opened this week in Seoul.

The musical “The Count of Monte Cristo” had its world premiere at Theater St. Gallen in Switzerland in March 2009. The production in Seoul is the first time the musical has been staged since then.

Robert Johanson, the director of the musical, said that he is a fan of the novel, which he described as a “classic story of redemption and forgiveness.”

“The theme is so powerful,” he said.

Johanson was the artistic director of the Paper Mill Playhouse, which was designated the Official State Theater of New Jersey in 1972, for more than a decade and he has been active both on Broadway and in Europe. He is familiar to Korean audiences through his 2008 musical production of “Hamlet.”

The director worked with the musical’s two creators - Jack Murphy, who wrote the script and lyrics, and Frank Wildhorn, who composed the music - to create a new version of the piece for its Asian debut.

“It was actually difficult to reproduce such a large-scale literary work on the stage, which has many limitations in terms of time and space,” Kim Ji-won, the producer of the Korean version of the musical, said.

“However, I am confident that audiences will be amazed when they see the more spectacular scenes, such as the one featuring the protagonist’s escape from the prison. It makes effective use of lighting and projections as well as suspension work by the actor,” Kim said.

The musical, which opened last Wednesday, is indeed full of innovative technical elements, most notably the scrim that flies in and out during the show. It functions as both a set piece and as a vehicle for plot and character development, at times creating tension or indicating the passage of time.

In one scene, leading lady Mercedes is grieving over the imprisonment of her fiance, Edmond Dantes, who is suffering an unjust punishment, when Dantes appears behind the scrim in the darkened background. Mercedes sings “Always with You,” her mellifluous voice bringing tears to our eyes. But it is the physical presence of Dantes himself that makes the scene so emotionally wrenching.

The music, which is played by a live orchestra, was also impressive, and heightened the drama of the experience.

Three actors alternate in the role of Edmond Dantes/The Count: veteran musical theater actor Ryu Jung-han and Um Ki-joon and Shin Sung-rok, who are more active in film and television.

“No matter who is in the leading role, audiences are sure to enjoy all this great musical has to offer,” Ock said.