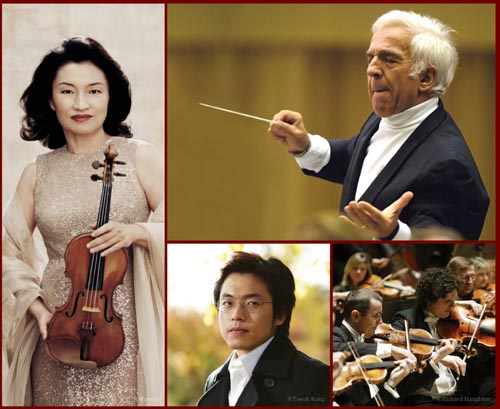 The Philharmonia Orchestra, conducted by Vladimir Ashkenazy (top right), will perform next week at the Seoul Arts Center. Special guests include pianist Kim Sun-wook (above center) and violinist Chung Kyung-wha (above left). The concerts begin at 8 p.m. See MUSIC, left. Provided by Vincero

The Italian tenor has sold over 60 million albums worldwide and has many hit songs, including “Time to Say Goodbye.”

In 1999, Bocelli became the first classical musician to be nominated for the Grammy Awards.

May 3 and 4: The London-based Philharmonia Orchestra is visiting Seoul for the first time in 15 years to hold concerts with two special guests.

The special guest on May 3 is renowned pianist Kim Sun-wook, who will play Schumann’s Piano Concerto in A minor Op. 54 and Rachmaninoff’s Symphony No. 2.

On May 4, violinist Chung Kyung-wha will be joining the orchestra to play Brahms’ Violin Concerto in D major Op. 77 and Beethoven’s Symphony No. 4.

May 4: Kelly Clarkson made her debut in the United States after being named the winner of the first season of “American Idol” in 2002.

She is currently on her All I Ever Wanted World Tour to promote the release of her latest album by the same name.

Clarkson has released four albums altogether, with sales of 56 million copies worldwide. She also earned an award for Best Pop Female Vocal Performance at the 48th Grammys in 2008. In 2009, her single “My Life Would Suck Without You” topped the Billboard single chart within a week of its release.

May 11 to 15: The Seoul Jazz Festival, celebrating its fourth anniversary this year, has established itself internationally as one of the best festivals in Korea’s capital.

The festival will include performances by Pat Metheny, Joe Sample, Randy Crawford, Chris Botti, Tower of Power and other world-famous artists, along with the Korean musicians Pak Jeong-hyeon, Kim Kwang-min and others.

THE BALLERINA WHO LOVES A B-BOY

To May 31: This perennial favorite brings street dance and ballet together. The performance tells the story of a ballerina who falls for a B-boy and breaks away from her classical training to become a B-girl.

Audiences of all ages will enjoy the dancers’ energetic performances and toe-tapping musical numbers.

Performances start at 8 p.m. on Wednesdays and Thursdays, at 5 and 8 p.m. on Fridays and at 3 and 6 p.m. on Saturdays, Sundays and public holidays.

May 12 to Nov. 14: “Thrill Me” has ranked No. 1 in ticket sales for three consecutive years since its 2007 premiere. The musical is based on the 1924 Leopold and Loeb murders in Chicago. It stars well-known musical actors Kim Moo-yeol and Choi Jae-woong as the infamous thrill killers who murdered a young boy just so they could commit “the perfect crime.”

Critics have called the Korean take on the musical a “robust and elaborate psychological portrayal” of Leopold and Loeb.

May 14 to Sept. 12: The musical with a score that the BBC says is “wonderful” and “timeless” is returning to Korea. Based on Puccini’s opera “Madame Butterfly,” this epic production centers on the romance between a strong-willed Vietnamese woman and an American soldier during the Vietnam War.

When the musical first came to Korea in 2006, it had over 250,000 viewers and was ranked the most popular musical of the year by Ticketlink.

The performance starts at 8 p.m. on weekdays, at 2 and 7 p.m. on Saturdays and at 1 and 6 on Sundays and public holidays. There are no performances on Mondays.

To May 8: A major contribution to the popularization of changgeuk opera, the National Changgeuk Company of Korea’s “Cheong” returns to the stage after a one-year hiatus. The traditional opera tells the story of Sim Cheong, the 15-year-old girl who sacrifices herself to restore her blind father’s eyesight.

Chosen as a celebratory production for the 60th anniversary of the National Theater, Cheong features gifted pansori singers.

Saturday to May 5: “Oneuri” tells the story of a young and beautiful girl in a place near the Woncheon River. The girl has been raised by a crane and does not know much about human life. So one day she sets off to see the world with the crane and her adventure begins.

The production features traditional Korean dances and songs, and is geared toward children of all ages and nationalities.

Performances begin at 11 a.m. and 2 p.m. on weekends and Children’s Day, which is on May 5, and at 2 p.m. on Tuesday. There is no performance on Monday.

Saturday to May 5: Boseong is considered the birthplace of the commercial tea industry in Korea and is the largest producer of tea in the country.

Other events include a tea exhibition and sale, as well as a number of celebratory performances.

To get there from Seoul, take a train headed toward Boseong from Yongsan Station, line No. 1.

Saturday to May 5: Located within a forest of 2.4 kilometers (1.5 miles) of bamboo, this festival is full of activities celebrating the beauty and function of the bamboo plant. More active visitors can test their skills during some of the festival’s scheduled river sports, such as log rafting and water bicycling. After working up an appetite, visitors can please their palates with some of Damyang’s famous cuisine and other foods from around the world at the Cultural Experience Center.

From Seoul, take a train headed toward Gwangju from Yongsan Station, line No. 1

Saturday to May 5: Hadong is famous for being the first tea plantation in Korea.

Unlike other machine-based production sites, Hadong continues to produce tea using time-honored traditional methods. As a result, it produces particularly high-grade teas, which are often sold at high prices.

During the festival, visitors can sample a variety of Hadong teas for free and purchase their favorites at bargain prices. The festival offers visitors a unique and entertaining combination of events and hands-on experiences, drawing a large number of visitors every year.

From Seoul, take a bus heading toward Hadong from Seoul Nambu Bus Terminal.

The Daegu Herb Medicine Market has been operating for 350 years. It is a truly an international market as visitors here will find medicines and merchants from countries such as China, Manchuria, Russia and Europe. This herb medicine festival displays medicinal herbs that are found in Korea’s mountains and visitors can experience a wide range of relaxing and curative traditional oriental medicine procedures.

From Seoul, take a train for Dongdaegu Station.

Sunday: The Jongmyo rite was the biggest and most important memorial service in the Joseon Dynasty (1392-1910). The ritual of taking the ancestral tablets of kings and queens was performed five times a year during that time, but ceased during Japan’s colonization of Korea (1910-1945) and resumed in 1969 as an annual event.

During the event, a re-enactment of the royal procession will be held, starting at 11:20 a.m. The entire event takes place from 9:30 a.m. until 2:40 p.m., beginning with a sacrificial offering and continuing with the Jeongjeon ceremony.

The procession departs from Gyeongbok Palace, passing through Sejong Intersection and Jongno 1-3 Streets, and arriving at Jongmyo’s Jaegung area.

The Jongmyo royal ancestral rite is Korea’s Important Intangible Cultural Property No. 1, and its music, the Jongmyo jeryeak, is No. 56. Together, they have been designated a Unesco Masterpiece of the Oral and Intangible Heritage of Humanity.

May 4 to 10: This festival celebrates the herbs of Mount Jiri, which are known to have medicinal properties. Visitors can sample herbs for free, and can later take home their favorite herb or remedy at an extremely reasonable price. Herb plants and seeds will also be for sale so that festivalgoers can try growing their own herbs at home.