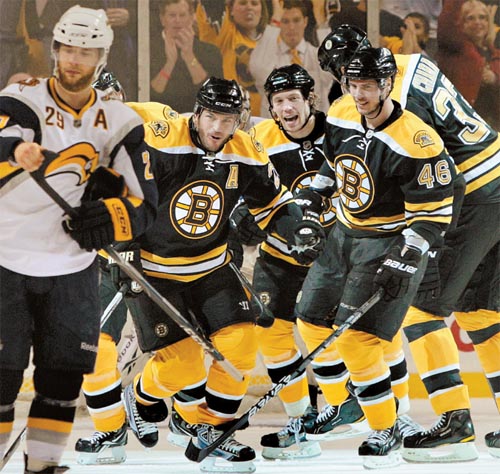 
BOSTON - It was the “Krejci and Recchi Show” in Boston on Monday as the Bruins knocked off the Buffalo Sabres 4-3 to clinch the best-of-seven series and advance to the Eastern Conference semifinals for the second successive year.

David Krejci scored twice and 42-year-old teammate Mark Recchi had a goal and notched his 75th career playoff assist. Miroslav Satan also scored for the Bruins, who clinched the series 4-2.

“He showed tonight that he has it, and every time we need someone to step up, he’s the guy,” Czech Olympian Krejci told reporters of Recchi, who first played in the National Hockey League in 1988.

Boston looked to have the game wrapped up at 4-2 in the closing stages, but Buffalo’s Thomas Vanek scored with just over a minute to play to put the home crowd on edge. Boston goaltender Tuukka Rask withstood an onslaught from the Sabres right down to the final buzzer. His coach Claude Julien paid tribute to the Finnish goalkeeper, who outdueled Buffalo’s U.S. Olympic netminder Ryan Miller.

“He was facing arguably the best goaltender in the league. To go up against him head-to-head and come out the winner, I think it speaks volumes,” Julien said. “We managed to hang on, and obviously have a good finish. It was about composure, making the strong plays, and not panicking.”

Boston had fallen behind in each of their previous three wins in the series but jumped out to a two-goal lead on strikes from Krejci and Recchi.

“Tonight was a situation where we had to show our best right from the drop of the puck,” said coach Julien. “If we could create the lead it would give us a better chance of winning.”

Winger Patrick Kaleta pulled one back for the Sabres in the second period but Krejci restored the Bruins’ two-goal cushion early in the third. Buffalo’s Nathan Gerbe and Boston’s Satan traded goals before Vanek’s late strike set up the rousing finale.

The Sabres were unable to generate anything on the power play and three missed opportunities on Monday took their record for the series to a miserable 0-19.

“It still ended up being a one-goal hockey game, but the disappointment is huge,” said Sabres coach Lindy Ruff. “We’ll have to sort through it and see where we’re at.”

The Bruins will play Philadelphia or Stanley Cup champions Pittsburgh in the next round.

Meanwhile, the Chicago Blackhawks scored four goals in the opening period then held on for a 5-3 win over Nashville to reach the NHL playoff quarterfinals for the second-consecutive season.

Jonathan Toews scored on the power play in a wild first period as the Blackhawks won the final three games of the series, setting up a second-round matchup with the Vancouver Canucks for the second straight year. Chicago hasn’t lost a game six in an elimination game since 1995.

Nashville has been eliminated in all five of its playoff appearances on home ice.

Jaroslav Halak made 53 saves as the Montreal Canadiens defeated the Washington Capitals 4-1 on Monday, avoiding elimination for the second straight game and setting up a seventh-game showdown. The young Slovakian netminder turned aside all 18 shots he faced in the first period as the eighth-seeded Canadiens again frustrated the NHL’s top team and erased a 3-1 series deficit.

The seventh and deciding game of the first round series will be played in Washington today.