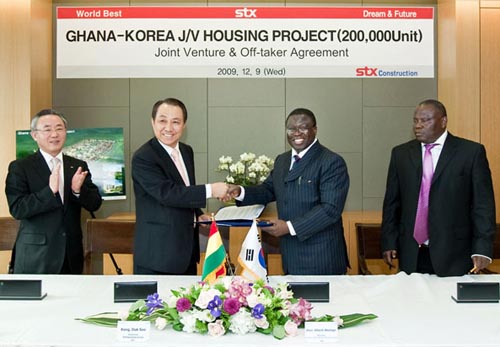 “This year is the 10th anniversary of STX Group, and an important year to look back over the last 10 years and set a foundation for development in the next 10 years,” said Chairman Kang Duk-soo. “This year we plan to concentrate on stable growth in shipping, marine industry and machinery and increase our business in plants, energy and resource development.”

STX is a rising star in the marine plant industry, based on its accumulated know-how in shipping and machinery. And thanks to its efforts in construction, it is penetrating the Middle Eastern and African markets.

At end of January STX Heavy Industries signed an MOU with the Iraqi government to build a steel complex and gas-fired power station in the southern city of Basrah. The integrated steelworks will produce 1.2 million tons of iron bars, 600,000 tons of section steel and 1.2 million tons of hot-rolled products per year. The power plant will produce 500 megawatts of electricity. After its completion, it will be turned over to an Iraqi state-run steel company. Meanwhile, STX Heavy won a $200 million steel plant bid in Jazan, Saudi Arabia, in September last year.

The conglomerate is also working to establish an infrastructure at Africa, the strategic market of the 21st century, by winning bids for huge construction projects that exceed $10 billion in scale. In December 2009, the STX Group signed a $10 billion deal with the Ghana government to build 200,000 units of housing in 10 cities including Accra. This private-public partnership to be finished in 2015 also includes commercial and education facilities, hospitals and hotels.

A focus on shipping and machinery will help promote STX’s marine plant business. In July 2009, to celebrate the start of production at the STX Dalian Shipbuilding Complex, the group held a ceremony with ship owners and shipping representatives to celebrate the installation of the first block of offshore pipe layer - the first offshore plant order STX Business Group received, scheduled for delivery to Technip in France in 2010.

The company secured orders for a floating storage unit and four drillships worth $800 million in 2008.

This year, the group plans to secure its EPC construction ability based on its successful record and win more bids for high-value-added projects, especially in the Middle East, South America and Africa.