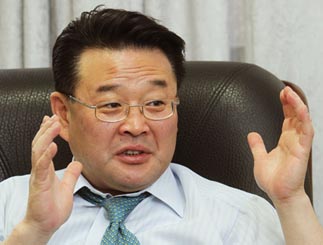 No one was able to stop Grand National Party lawmaker Cho Jeon-hyeok last Monday when he posted on his Internet home page the identities of teachers who were members of the left-wing Korean Teachers and Education Workers’ Union. The teachers’ union had been accused of holding anti-government protests even though teachers and other civil servants in Korea are not allowed to participate in collective political activities.

Cho chose to identify the teachers in spite of a ruling by the Seoul Southern District Court this month that ruled in favor of the teachers’ union injunction requesting the identities be kept private.

Before becoming a GNP lawmaker, Cho taught economics at the University of Incheon. Afterwards, he was involved in education-sector civic movements before becoming a politician. Even when he was teaching, he expressed strong criticism of the progressive teachers’ union.

Cho said he revealed the teachers’ names because he was “angry.” When asked if fighting the teachers’ union is difficult, he said, “No. I don’t do anything that I don’t think is worthwhile. If someone comes off strong, I am more motivated to fight,” he said during an interview with JoongAng Sunday. Throughout the interview, Cho frequently lit up Marlboro Red cigarettes.

Q. It is quite rare for a former economist to be involved in education movements.

A. From midway through the Kim Dae-jung administration, I began to worry about the state that the country is in. By the Roh Moo-hyun administration, I was angry. When I was teaching economics, the students were deep in totalitarian thought and were anti-market and anti-capitalism.

I thought to myself, what has this era come to? I thought that I needed to change the students’ thinking. So instead of teaching upperclassmen, I taught introductory classes instead because I was of the opinion that the fundamental thinking processes [of students] need to change.

Later on, I wrote a newspaper column. People started referring to me as a right-wing columnist and I began to meet people who share my thoughts.

After that, you became a full-on activist.

Yes. Before becoming one, I was just a professor who taught students and did some research projects, played golf and enjoyed the academic life. However, while I started writing, I began to feel energized and so I rolled up my sleeves and created the National Liberal Education Association.

Do you feel that the Korean Teachers and Education Workers’ Union is a group that should just disappear?

No. In fact, I don’t hate the Korean Teachers and Education Workers’ Union. I think the union thinks of me as a stubborn, capital market worshiper. They are strange people. I don’t judge people on who they are - I only look at the overall picture and see if the situation is alright.

After becoming a lawmaker, you pushed for and revealed various education-related information to the public, including university entrance exam test grades and the identities of the teachers’ union members. Why?

I made it my goal to gather, evaluate and open all education-related information. I think it is dumb for each school to come up with an average score for their students’ university entrance exam test grades. This kind of data should be processed and evaluated by the Ministry of Education.

Also, parents are curious about their children’s schools, starting with the meals, their social lives and problems. However, education offices send out only one school commissioner to look over things and that’s that. It should be made mandatory for all schools to do a parent survey once every semester and reveal the results on the school’s home page. If so, principals and teachers will try to solve problems. I think that if one assemblyman pushes these kinds of things to the end, it can be done. This was what I did with revealing the identities of the KTEWU members.

What do you enjoy most about being a lawmaker?

Everyone I met who is a lawmaker said they like being one, but I’m not sure in my case. I don’t have anything particular I am proud of. I like the fact that I have the power to table a bill and be able to announce things such as the identities of the teachers’ in the teachers’ union. Compared to being a professor, being a lawmaker gives you much more impact in changing the world and is more dynamic. However, I still feel as though my job is just an extension of what I used to do as a civic movement leader rather than feeling like a politician. However, because many people know my face, I can no longer enjoy the kind of privacy I had prior to this job.

Your drive to accomplish things is impressive.

When I do things, people tell me that I fight with my back to the wall [meaning that one gives one’s all in doing something]. I want to take this controversy [revealing the identities of teachers] up to a constitutional ruling. The KTEWU said that revealing their names is a serious violation of their individual rights and I want to see if this is true or not. Even if it is a violation, I want to figure out whether revealing their identities anyway is a sacrifice on their part for the greater good of the public. I will figure out whether this information is truly something that should not be revealed.

[Last Friday, Cho submitted a request to the Constitutional Court for a judgment on whether the Seoul Southern District Court’s decision ruling in favor of the KTEWU’s identities not being revealed had violated his rights as a National Assembly lawmaker.]

You seem to have your own philosophy on education.

Former British Prime Minister Tony Blair once referred to education as the best economic policy. However, I feel that education is not only the best economic policy, but also the best welfare policy, the best social policy and a determiner of history. Look at anybody who has succeeded in life. There are people who educated themselves throughout their lives in some form or another. Companies that succeed to educate their employees well. To maintain a good household and a good country, a successful education system is a must.

Are there any bills that you will focus on in the future?

The abolishment of the private school law and enforcing additional punishment for crimes related to the education sector. If a teacher receives a bribe, he or she should not be able to return to school. Any actions which manipulate freedom and are wrong, must be punished severely.

What is your dream for the education sector?

At the moment, schools are not able to function normally due to the black market that is the private education sector. A “smart” student from a poor family can’t compete with a “stupid” student from a rich family. Looking at the big social picture, this is not effective or fair. We need to improve the efficiency as well as fairness regarding education. Through education, different social classes must be able to progress equally. This is my dream.