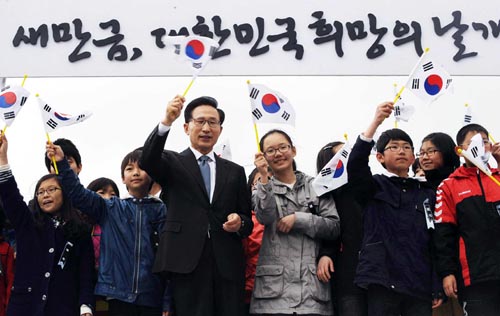 Surrounded by children, President Lee Myung-bak waves a national flag yesterday at the ceremony to mark the completion of the world’s biggest dike in Saemangeum area in north Jeolla. By Cho Mun-gyu


The government will lure foreign investments to and accelerate the long-delayed development of a 28,300-hectare (69,930 acres) swath of reclaimed land in the southwestern coastal region of Saemangeum, President Lee Myung-bak said yesterday.

In a speech celebrating the completion of the world’s biggest dike - a massive project in the Samemangeum area that took nearly two decades - Lee reiterated his vision of developing the region into a tourism and business hub for Northeast Asia and the world by pumping money into transportation networks, water quality and other efforts.

The event took place at the Saemangeum reclamation site in Gunsan, North Jeolla.

“Domestic investments are not enough to get the best use out of this enormous piece of land, so I have laid out plans to develop it as a global area that will draw visitors and investments from across the world,” Lee said.

Along these lines, the president said he will sign a memorandum of understanding with the prime minister of the Netherlands tomorrow regarding the European country’s plan to invest and cooperate in the development of the Saemangeum region.

The Netherlands ranks as the third-largest investor in Korea after the United States and Japan.

Lee also said his administration will speed up development programs for the reclaimed land, with the aim of completing the first phase by 2020 -10 years ahead of schedule.

“Because this state project has been delayed, precious taxpayers’ money has been wasted, and the program has lost its momentum,” Lee said.

The massive reclamation project was initially mapped out in the 1970s with the goal of creating farmland to prevent food shortages.

Construction of the dike finally kicked off in 1991, but its progress slowed as political priorities shifted in each passing administration. Development was even halted for several years due to protests by environmentalists.

With the passage of time, though, the rest of the development plan has shifted to meet the needs of today’s society.

“In the 21st century, the world economy is globalizing and Northeast Asia’s era has begun,” Lee said. “In this new era, the Saemangeum project won’t be successful with the old vision of food production.”

The Lee government announced last year its decision to shift the development direction of the problem-plagued project. The new master plan of investing 21 trillion won to develop a world-class international conference, tourism and leisure destination was finalized in January of this year.

Lee said yesterday that the government will invest in transportation systems to make Saemangeum a hub of production and shipping on the Yellow Sea coast. “By improving its link with the bullet train network in the Jeolla region, of which construction began at the end of last year, the Saemangeum area will be equipped with the necessary transportation infrastructure including airports, harbors, railways and highways,” Lee said.

Lee also promised to spend 3 trillion won by 2020 to improve the water quality of the rivers near the area to be clean enough to develop tourism and leisure businesses in the region.