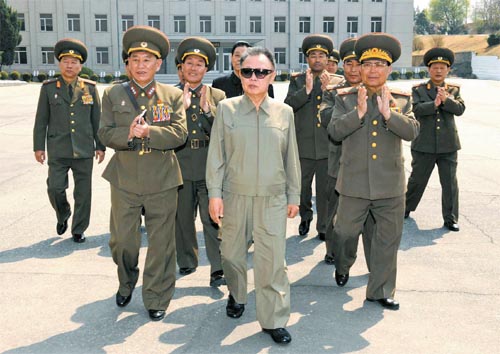 
A North Korean ruling party official has said its military has recently taken “great revenge” on South Korea, an online news outlet reported yesterday, giving weight to speculation that North Korea was responsible for the sinking of the South Korean vessel Cheonan.

Quoting its source in North Korea, The Daily NK, devoted to news on the North, reported that a Workers’ Party official last Saturday visited party members working at a factory for a weekly seminar and told the audience: “The heroic People’s Army [of North Korea] recently took great revenge on the enemies, and South Korea is now shaking with fear of our independent military force.”

The Daily NK reported that the party official didn’t specifically mention the Cheonan but members of the audience believed the rumor of a North Korean attack had been confirmed.

Another source told The Daily NK that “most” North Koreans thought their country’s navy sank the Cheonan and that their government wasn’t trying to mute rumors of its involvement.

North Korea has denied responsibility for the sinking. But its leader, Kim Jong-il, recently visited the country’s reconnaissance bureau, which has been suspected as the agency behind the attack.

North Korea’s state-run media showed video on Monday of Kim visiting Army Unit 586 on Sunday, the 78th anniversary of the founding of the North’s armed forces. Kim was received by Lt. Gen. Kim Yong-chol, head of the reconnaissance bureau, and accompanied by Kim Yong-chun, minister of the People’s Armed Forces.

South Korean intelligence suspected Unit 586 was a cover for the reconnaissance bureau and now believes Kim Yong-chol’s presence confirms the fact. The bureau is responsible for collecting intelligence on and carrying out actions against South Korea.

This was Kim Jong-il’s first public visit to the bureau. Analysts said it was highly unusual for the media to report on a visit by Kim to a place that otherwise would warrant secrecy. They said the fact that he visited the bureau on the anniversary of the military’s founding indicates the clout of the bureau.

The bureau expanded last year after merging with the operations department under the Ministry of the People’s Armed Forces. Two North Korean agents who were recently arrested in South Korea while preparing an assassination attempt against defector Hwang Jang-yop were members of the bureau.

If North Korea is still found responsible despite its denial, then the United States is prepared to take action, said Kurt Campbell, assistant secretary of state for East Asian and Pacific affairs, late Monday. He also said he hopes to see China “to play a responsible role.”

Addressing reporters in Hong Kong after a press conference, Campbell said Washington has asked China to deepen its involvement as South Korea and other nations try to determine the cause of the naval incident.

“We explained our role in taking recovery efforts and encouraged China to play a responsible role,” he told reporters.

“China expressed deep concerns for the loss of life and the tragedy. I think they are watching carefully in terms of how this process is playing out.”

South Korean investigators have tentatively concluded that an external blast split the 1,200-ton naval corvette in half on March 26.

Defense Minister Kim Tae-young has pointed to a torpedo attack as the likely cause of the explosion.

Foreign Minister Yu Myung-hwan has talked about bringing the case to the United Nations for further sanctions if the North is found responsible. China is one of five permanent members with veto power in the Security Council, whose unanimity is required for sanctions. China joined other permanent members - the United States, Britain, France and Russia - in applying sanctions on North Korea after the nuclear test last May.